As a family we are firm believers that, if its made local it tastes better, and it doesn't come more local than the Award Winning

A family run business that believes "Food tastes better from the farm" and three generations can't be wrong, surely!
Now run by Victoria and James Robertshaw, they a firm believers in only selling first rate food, and if they love it, they'll support it 'til the cows come home, and they do this four ways....

~ Support local producers and farmers ~
They champion over 400 from Yorkshire

~ Making a difference for the community ~
They provide jobs for local people, give their time and resources to help with community work, fundraising and education to name but a few.

~ Offering exceptional taste for minimal waste ~
Only buy what you need! Keelham's fruit and veg isn't pre-packed, want one carrot then buy just that, no waste and no fuss.

So what is this blog post actually about i hear you ask? Well, when the other half came home with a very large brown box i pondered what was inside BUT before he had chance to open the box or his mouth, i spotted the farm shops logo and knew it would be something of quality, and just look what was crammed inside!

Mince pies, Christmas cake, Mints, Chocolate and much much more!

As i ohhh'd and ahhh'd over the contents and taking the odd snap, the other half and our daughter were laying claim to its contents..... Off went the chocolate and mints with the daughter...... and the other half whipped the cake and mince pies, in fact the pies were gone in an instant because
"You can't just eat one, they HAVE to be eaten in two's"
or so I'm told!

And with his mouth full i was told
"These are the best mince pies ever!"
BIG thumbs up from the other half there :)

So that leaves me with, you guessed it, the  cooking stuff!
What better to use this stuff on than Christmas dinner ;)
So to play with i had

~ Goose Fat ~
A must for the roast potatoes because lets face it dinner wouldn't be complete without them. And i have to say they turned out fab! The were light and fluffy on the inside while the fat had made them lovely and crunchy on the outside, just they way we like them!
*Note to self, buy goose fat for next Christmas*

~ Wild Sage and Roast Onion Stuffing ~
This went down a treat, in fact our guests were asking for more but the bowl was bare!
This stuffing was very tasty but not over powering and the roasted onion just added to the flavour perfectly.
Very easy to cook too.

~ Cranberry Sauce ~
Now me personally I'm not a fan of Cranberry Sauce but i had a little taste and i must say it was rather nice. It wasn't chunky and bulky like i expected and the tangy taste was a yummy surprise.

We also had Fine English Wheat Fingers and Mulled Wine Chutney which went hand in hand with some delicious cheeses that we had.

Best hamper i have ever had!

So the next time you're having a get together why not pop along to Keelham Farm Shop, it has everything you could possibly need and much much more!

For hits, tips and some great recipe ideas be sure to check out Keelham's social pages

*All photos (apart from the store shot) and comments are our own,
Posted by A Blogs Life at 09:01 2 comments:

It seems to be a British tradition that when you go on holiday the first photo we take is of the bathroom! Think I'm wrong? Check your snaps :)

And our latest holiday was no exception.
Welcome to the Hilton Bonnet Creek, Florida !! 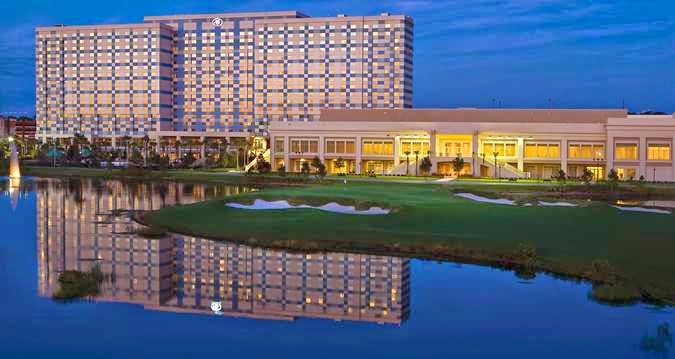 But the complementary toiletries O-M-G!

I know its the Hilton but I wasn't expecting Peter Thomas Roth goodies laid out for my pleasure, and a pleasure it was! 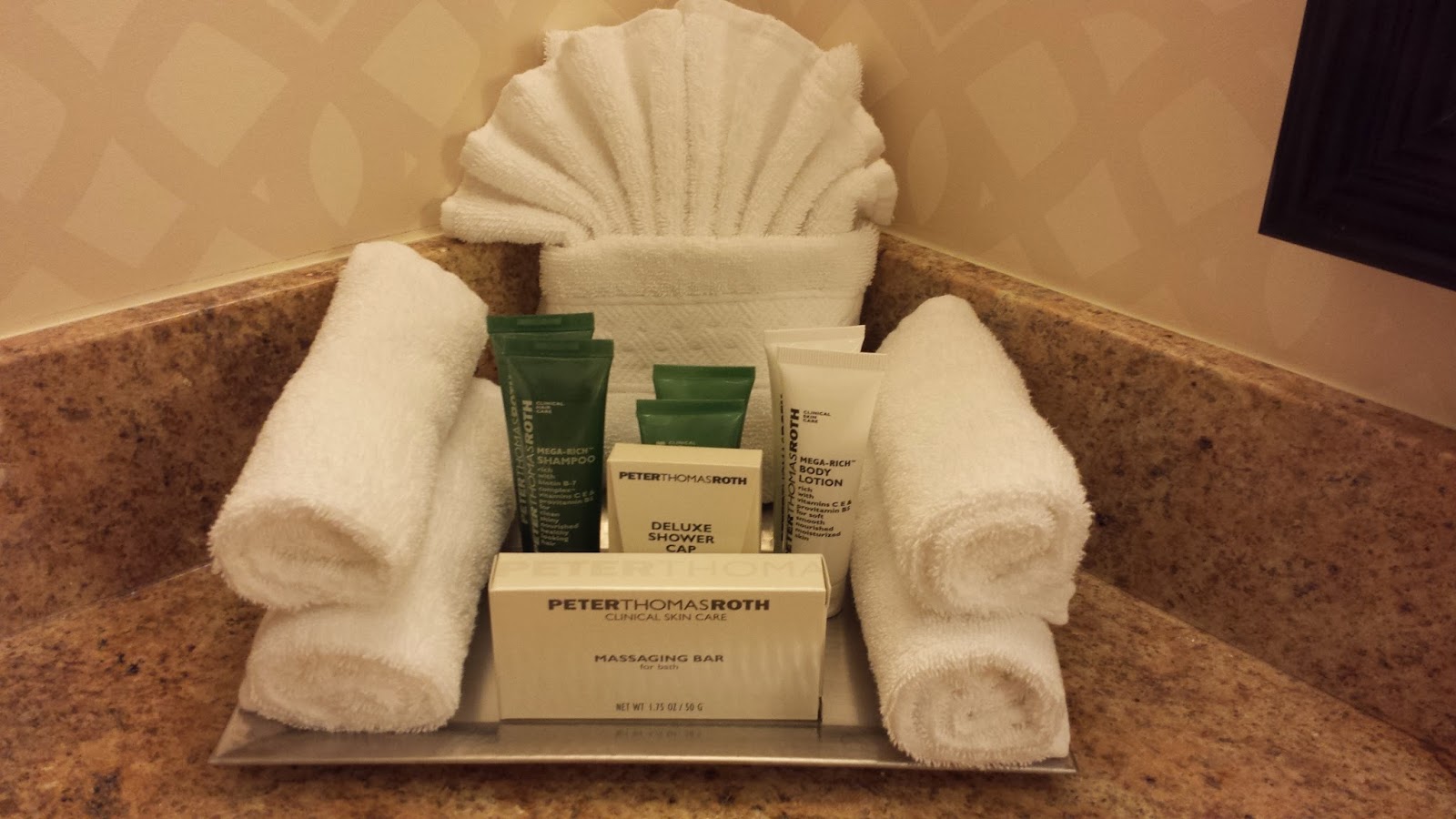 I mean just look how pretty it looks AND it was put in our room EVERY day..... that in itself is a treat. 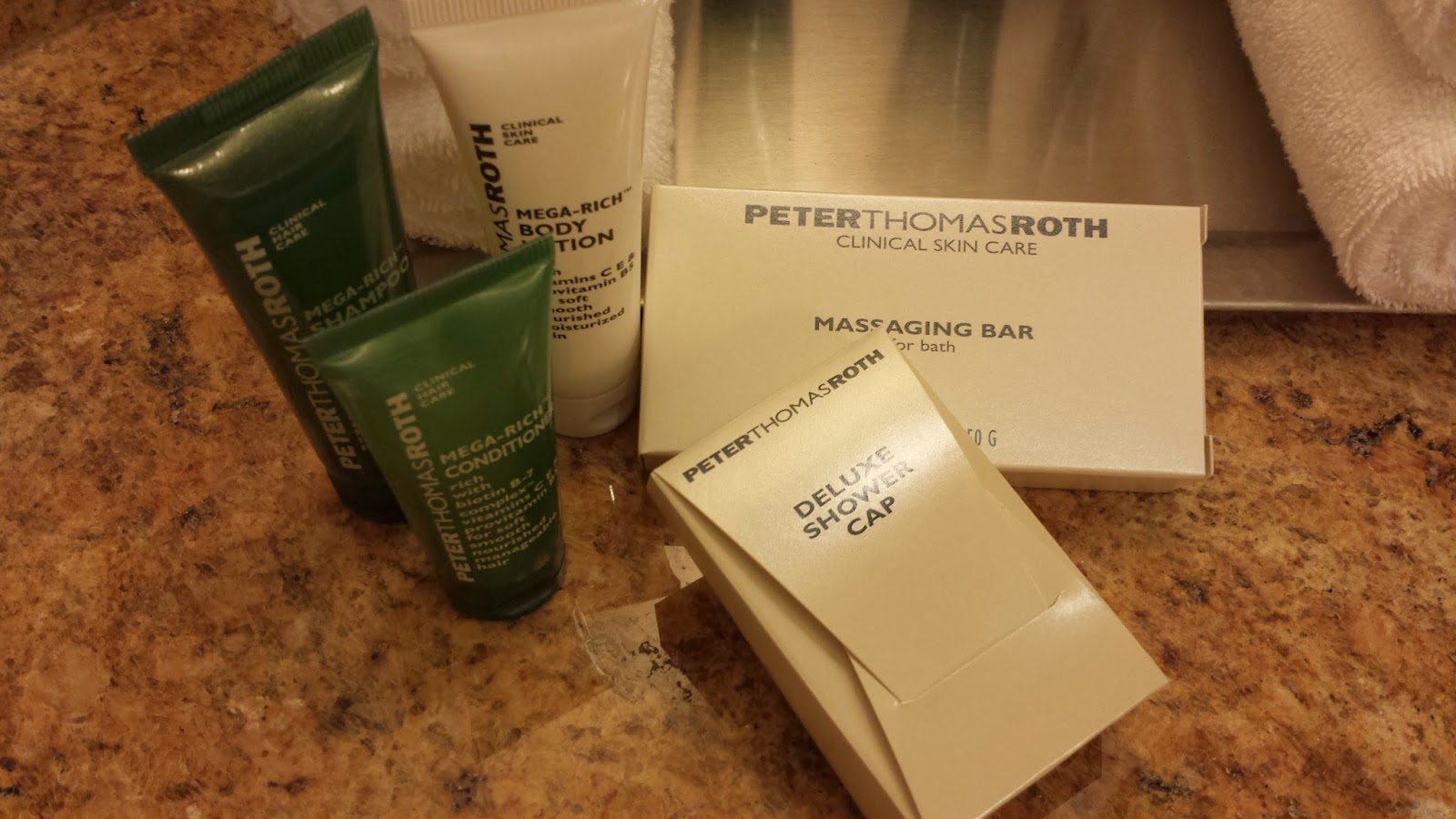 I'm not going to lie, I may have spent a tad longer in the shower than necessary when using these products.

The soap was like a lava eruption! It left your skin feeling super smooth and the massaging bumps on the bar made me feel like id had an actual massage *heaven*

The shampoo and conditioner is the best I have ever used! In fact, id travel to Florida all over again just to use it, a little extreme you might think but this stuff is awesome. It left my hair soft and silky, and my usual fight to get the comb through it was not necessary which is always an added bonus. 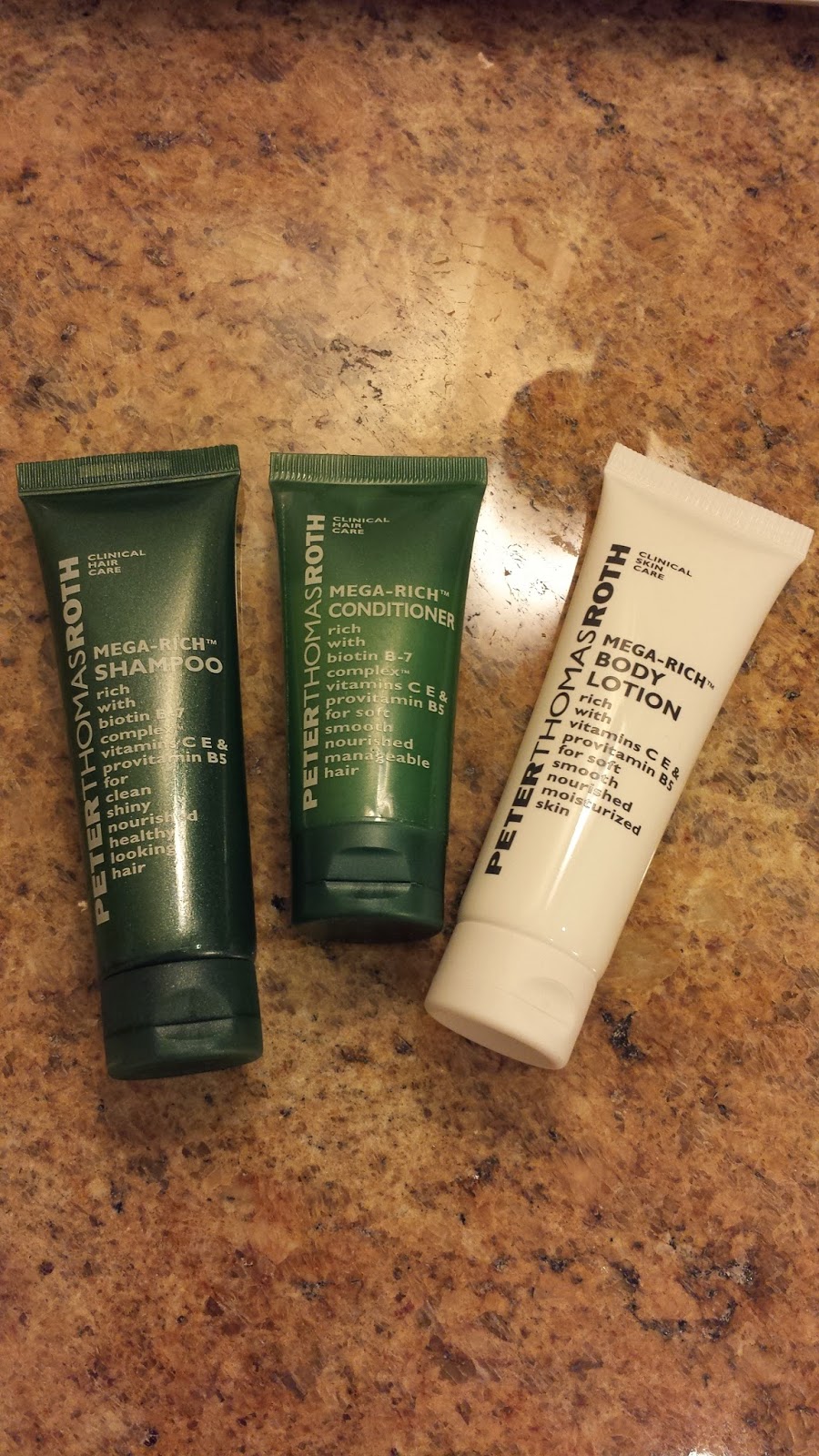 This lotion is unlike ANY other body lotion I have tried......and I have tried a lot!!
I have quite dry skin but this stuff sorted that straight out.
Its not greasy like some of the lotions you can guy on the high street. Its not heavy and you don't have to rub it for ages to get it to sink in and it also doesn't leave a shine on your skin, this stuff definitely ticks all the boxes for me.
I even caught the other half using it but unlike me he was using it to shave with!! I know
*shock horror*

He has very sensitive skin and most shaving foam irritates him and because I must have been going on and on and on about this lotion he decided to shave with it, the results, well I had to take to hiding at least one tube of it so he didn't use it all. He must have shaved with that stuff for the remainder of  our holiday
*BIG thumbs up*

If only all hotels stocked this stuff......fingers crossed our hotel in NYC does!!

Its a family tradition in our house, that, once the festive-ness of paper ripping and stuffing your face until you are fit to burst is out of the way, then the only thing left to look forward to is GIANT men lifting, dragging and throwing, what can only be described as stupid sized objects, around for our entertainment!

There's nothing better than cheering on your favourite giant, and we as a family have different favourites, which adds to the fun :)
All in the hope that your giant will walk away with one of these stunning trophies. 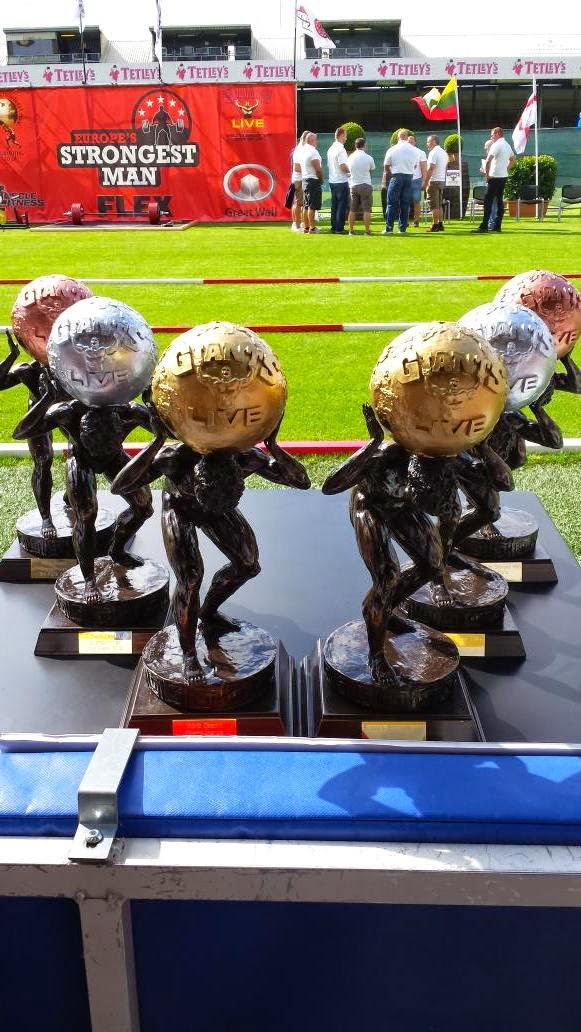 BUT why watch it on the TV when you can watch it live...... Yes, we managed to get tickets to see some of these giants when Europe's Strongest Man came to Leeds! 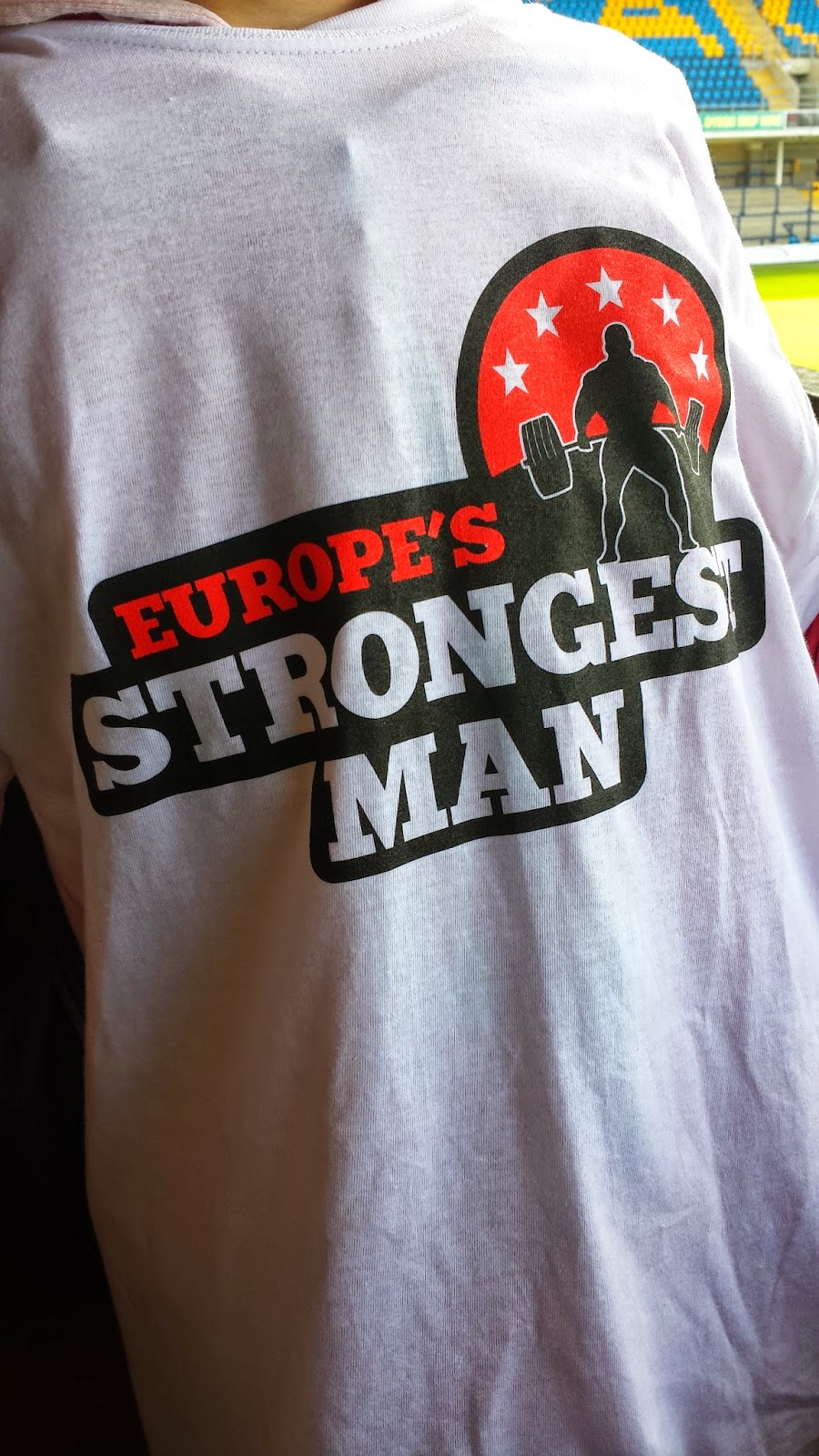 An 8000 strong crowd greeted these giants, who in my opinion, put on one of the greatest shows ever!
Lets meet the competitors!!!!! 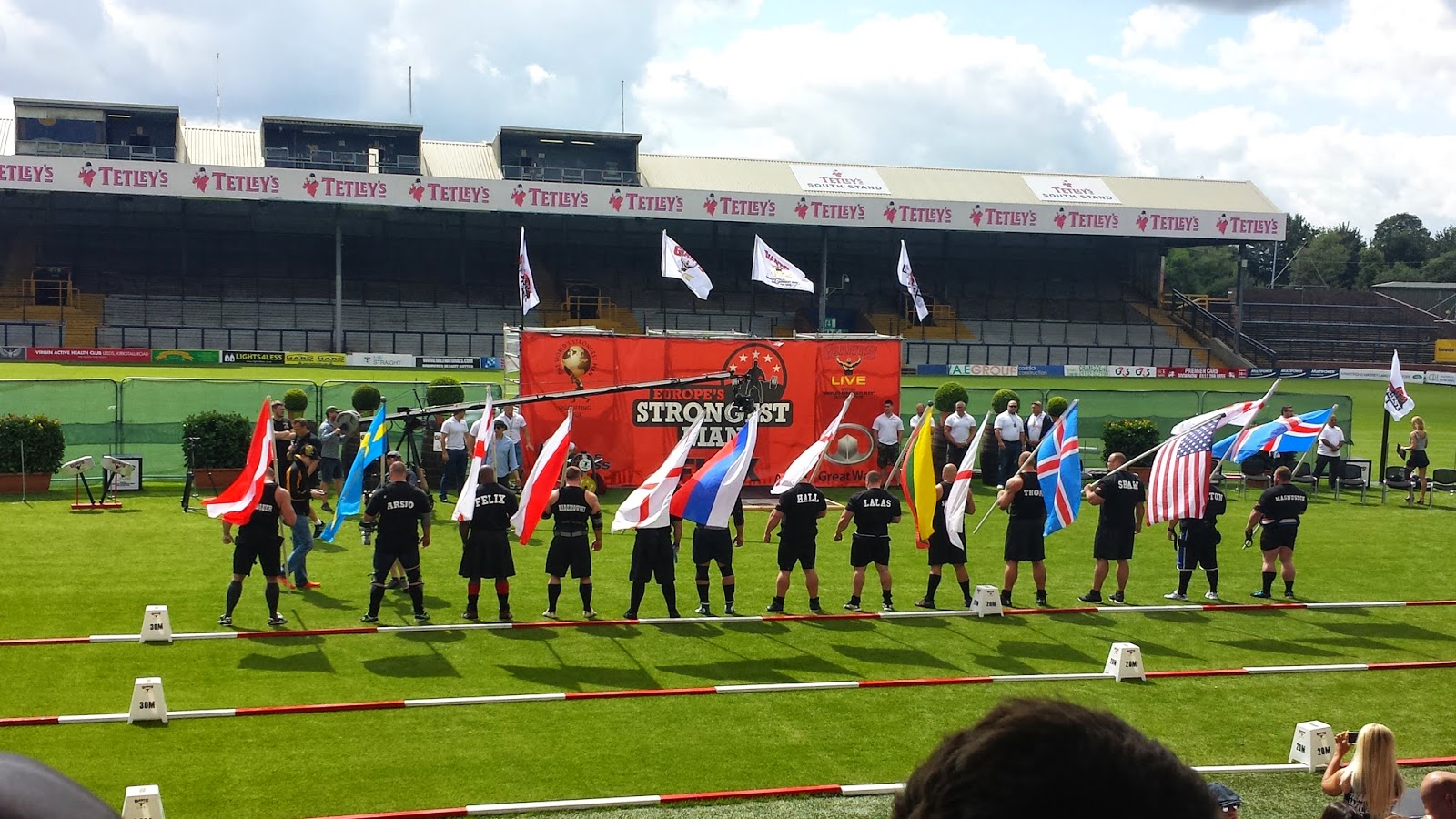 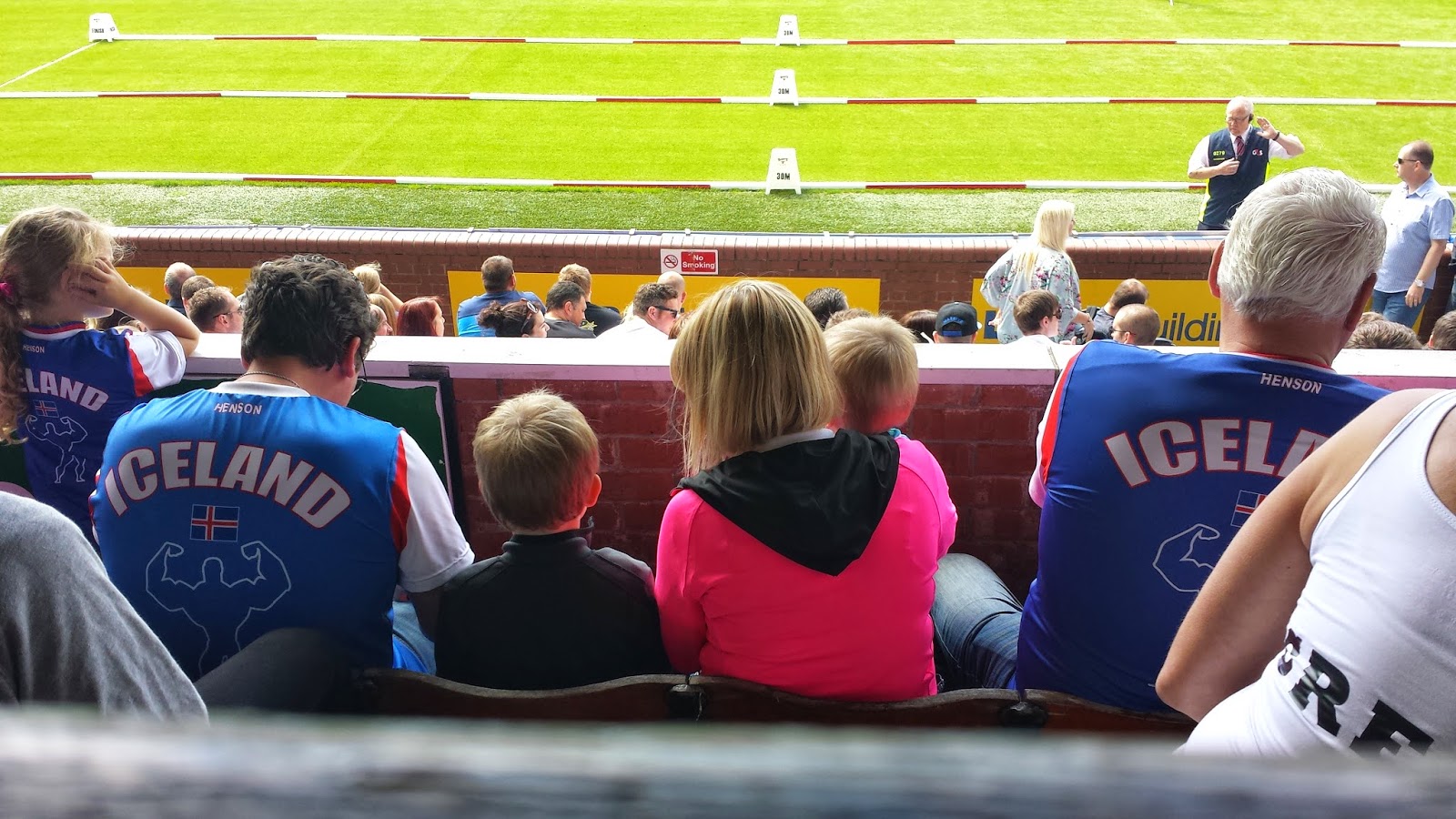 And Caroline Pearce had to strut her stuff before the action started, much to the pleasure of the male fans ;) 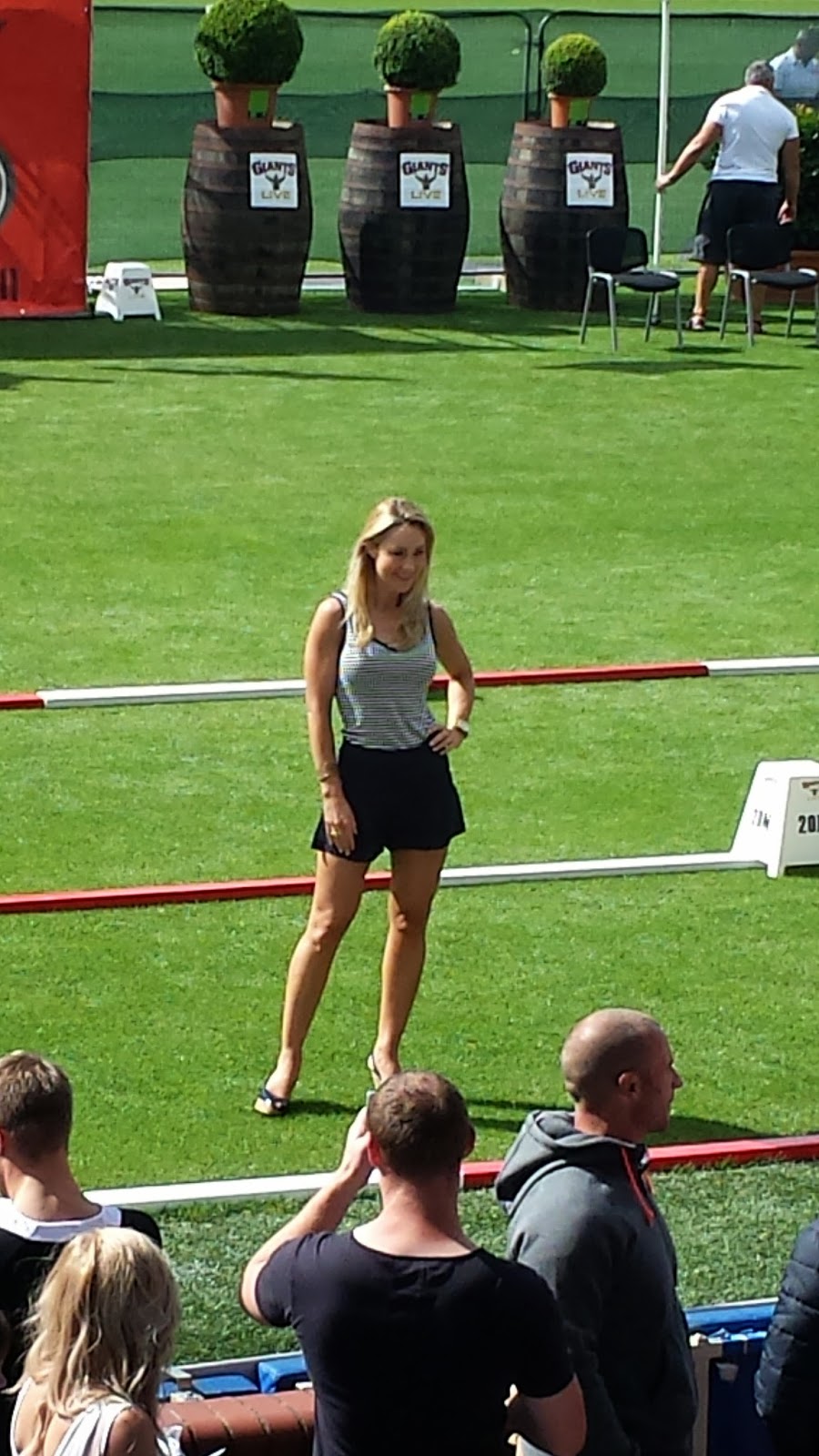 Now before the show starts we have to get the most important business to get out of the way, who will WIN?! And naturally we all had our favourites...... 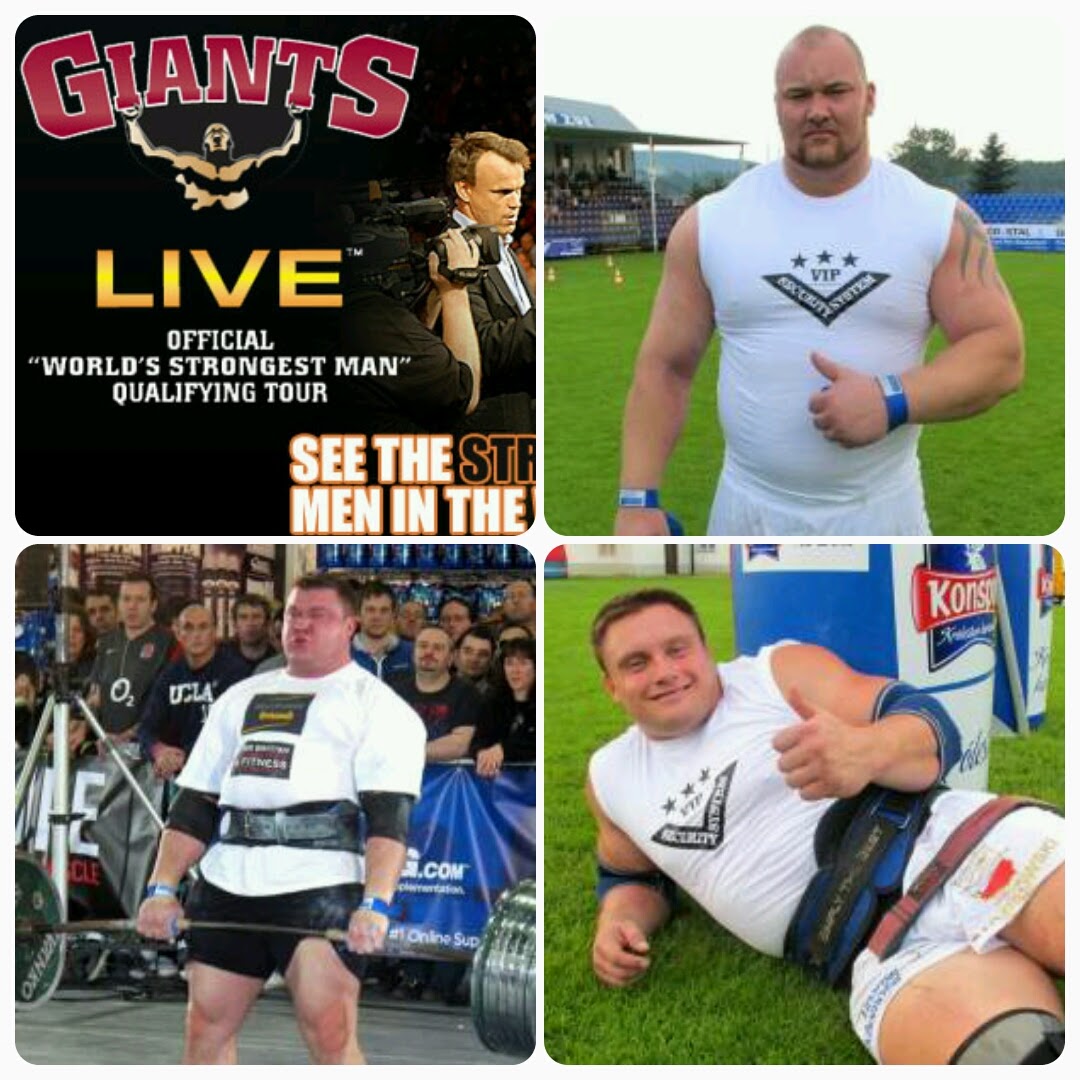 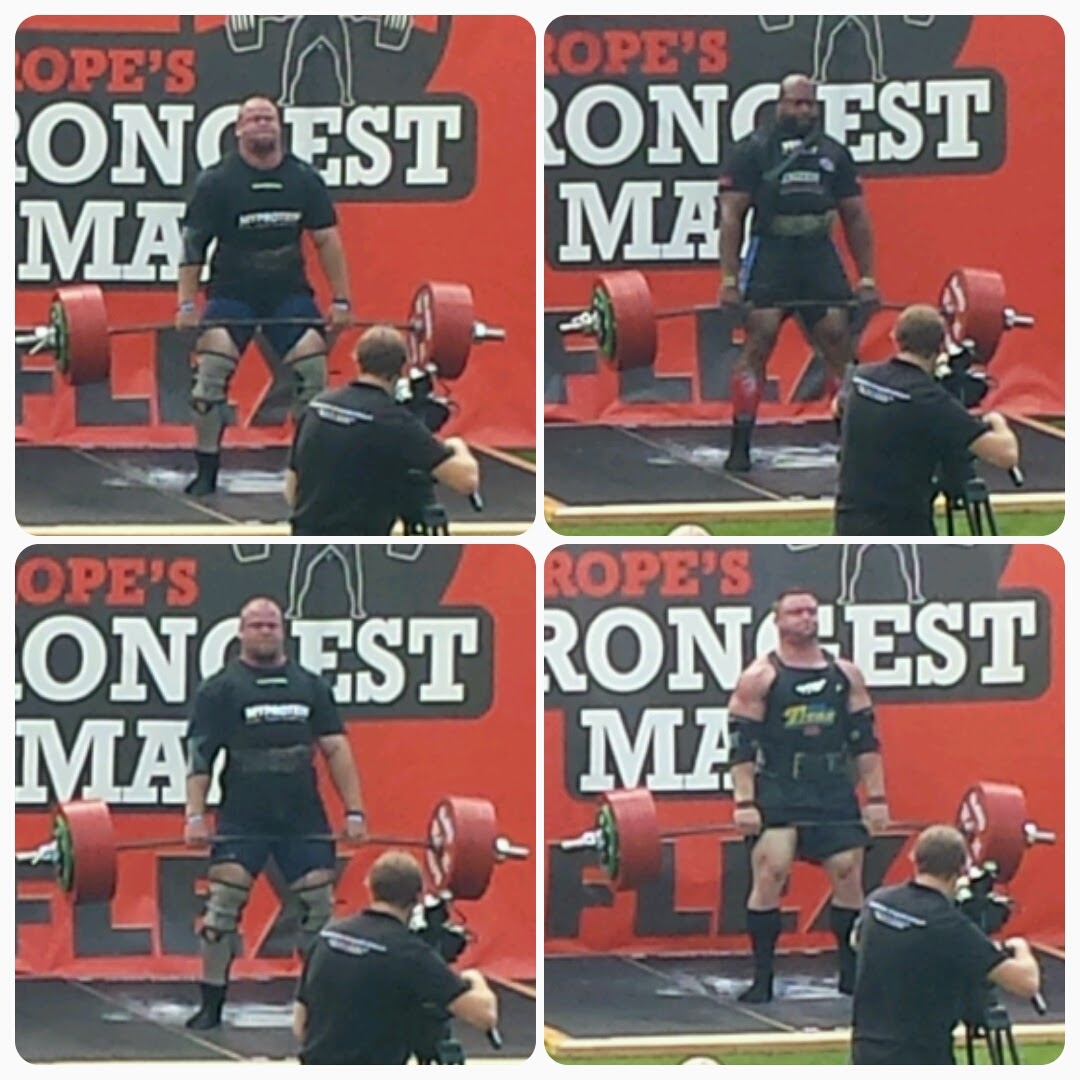 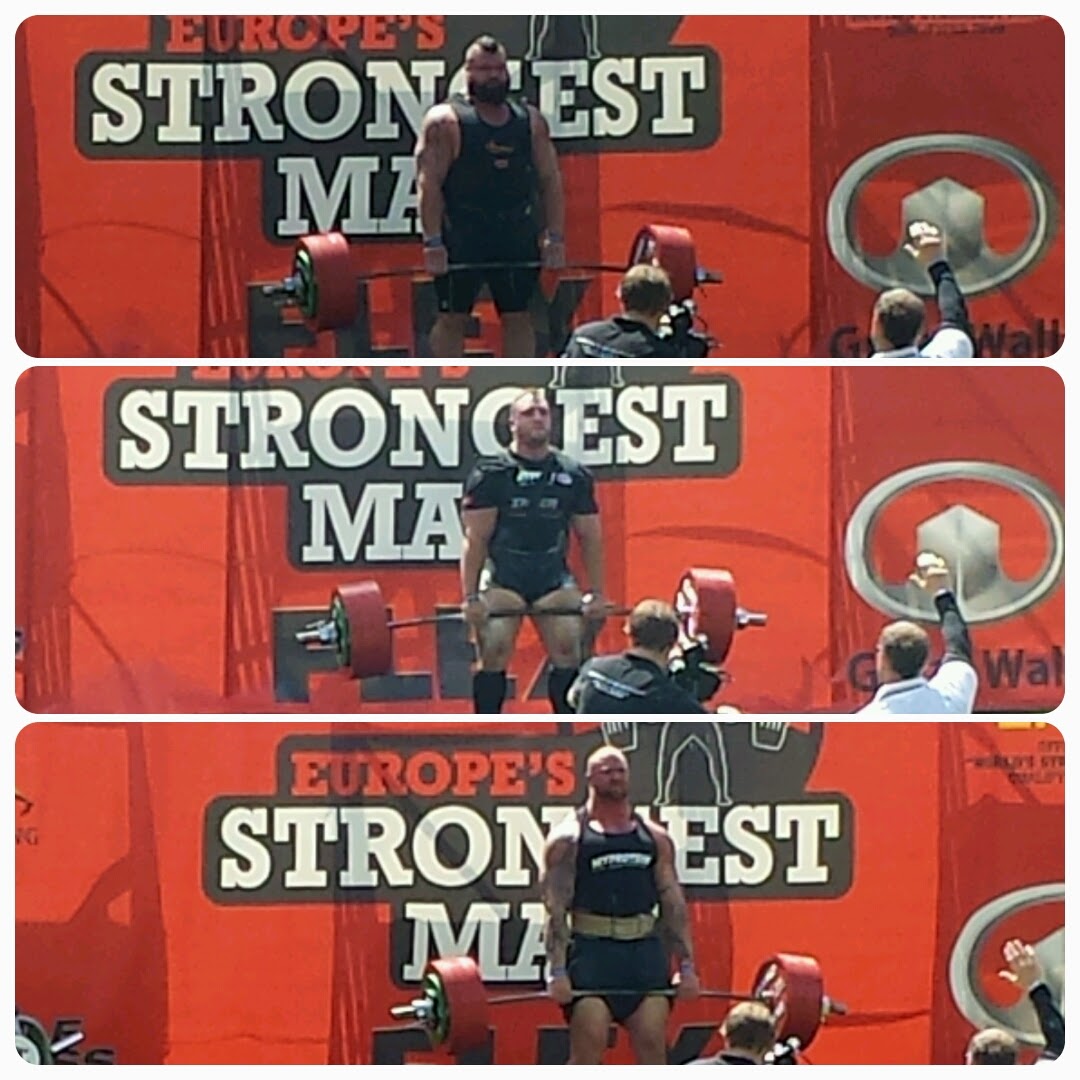 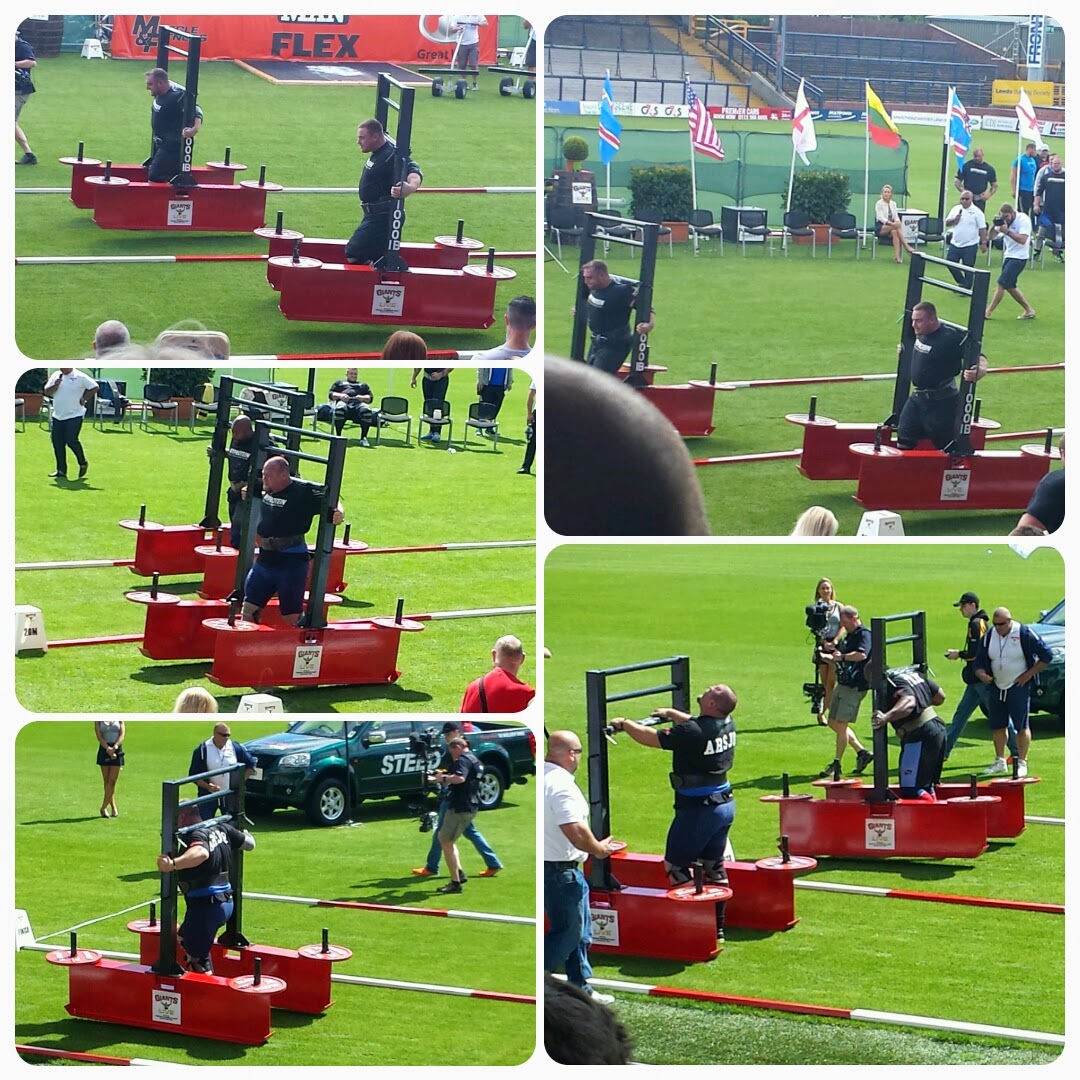 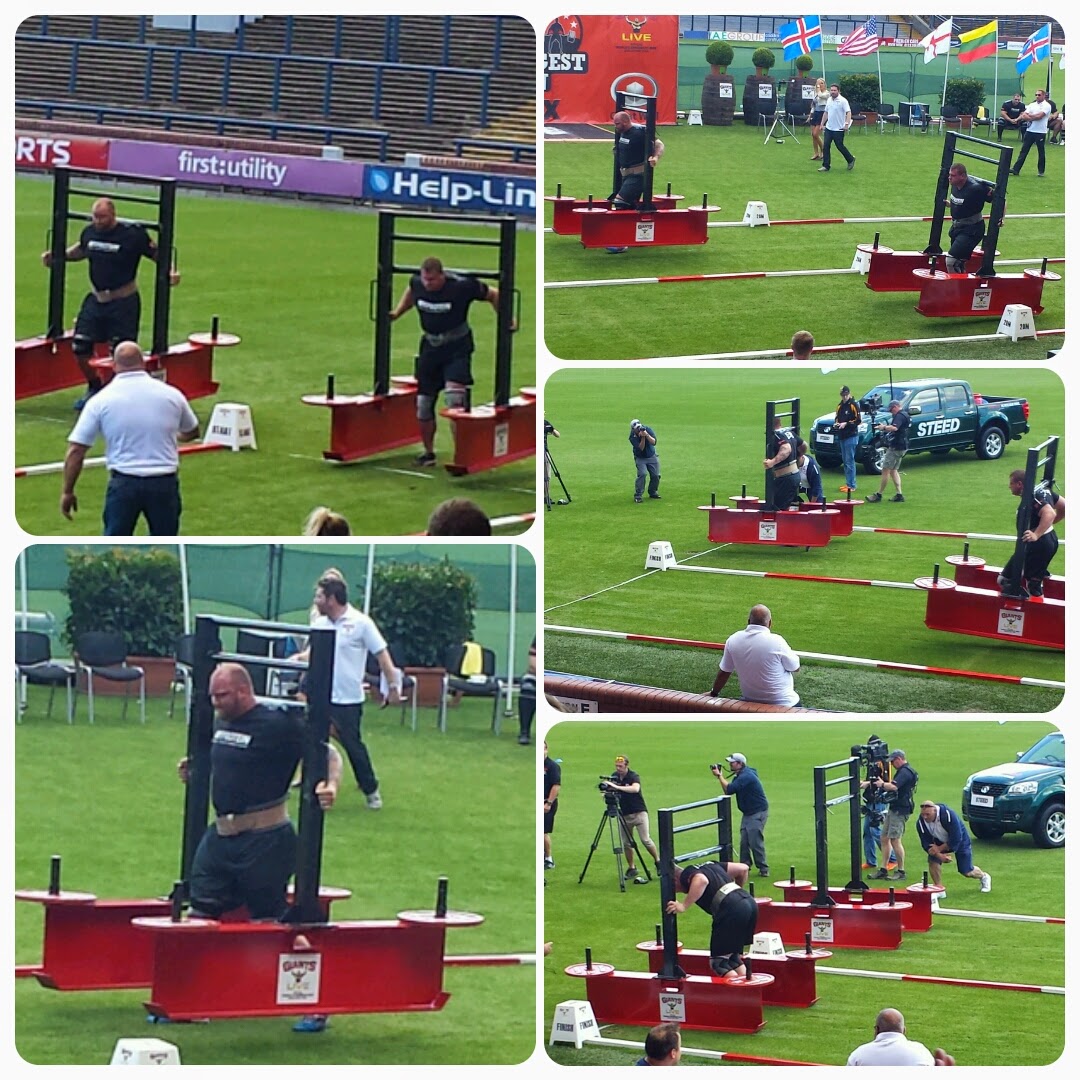 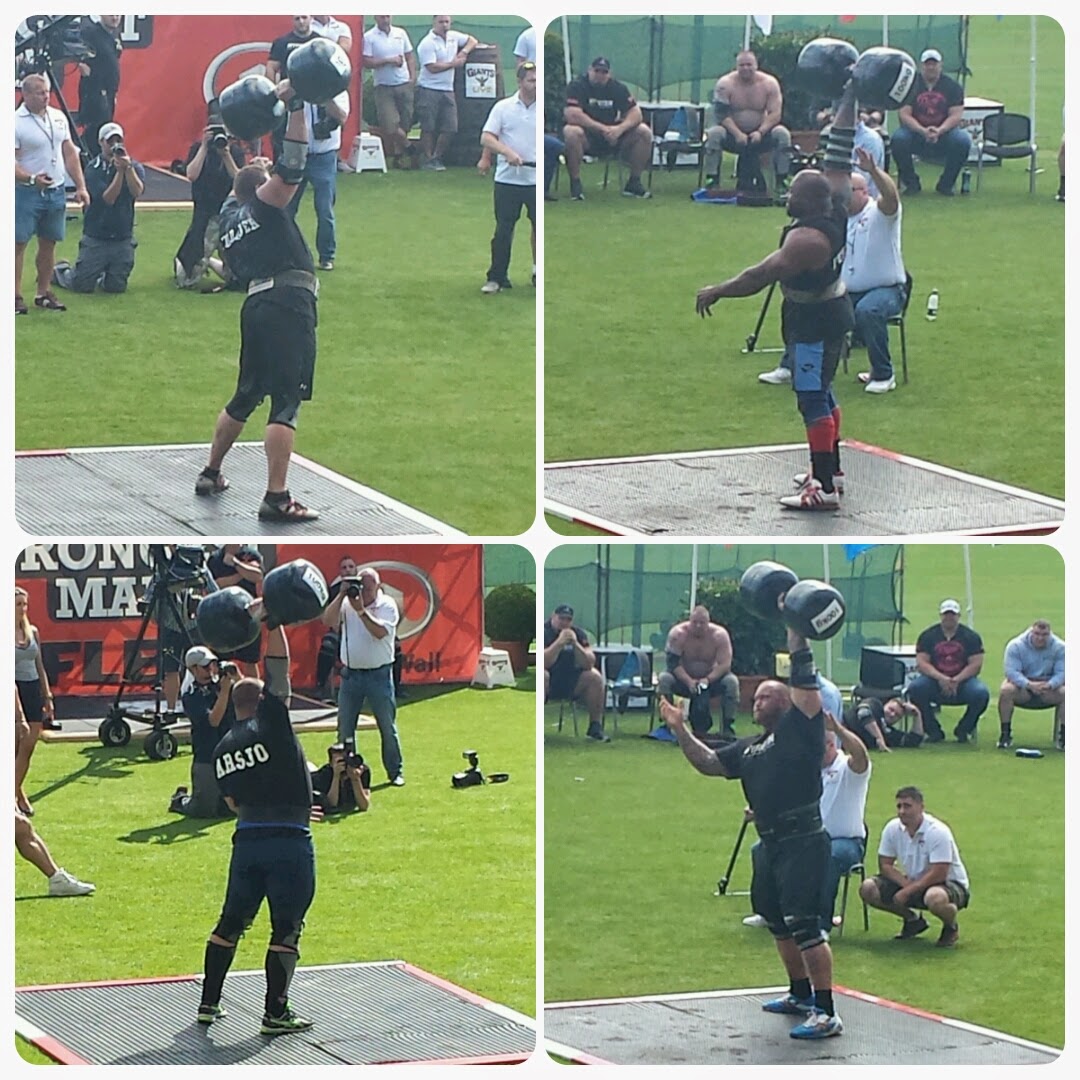 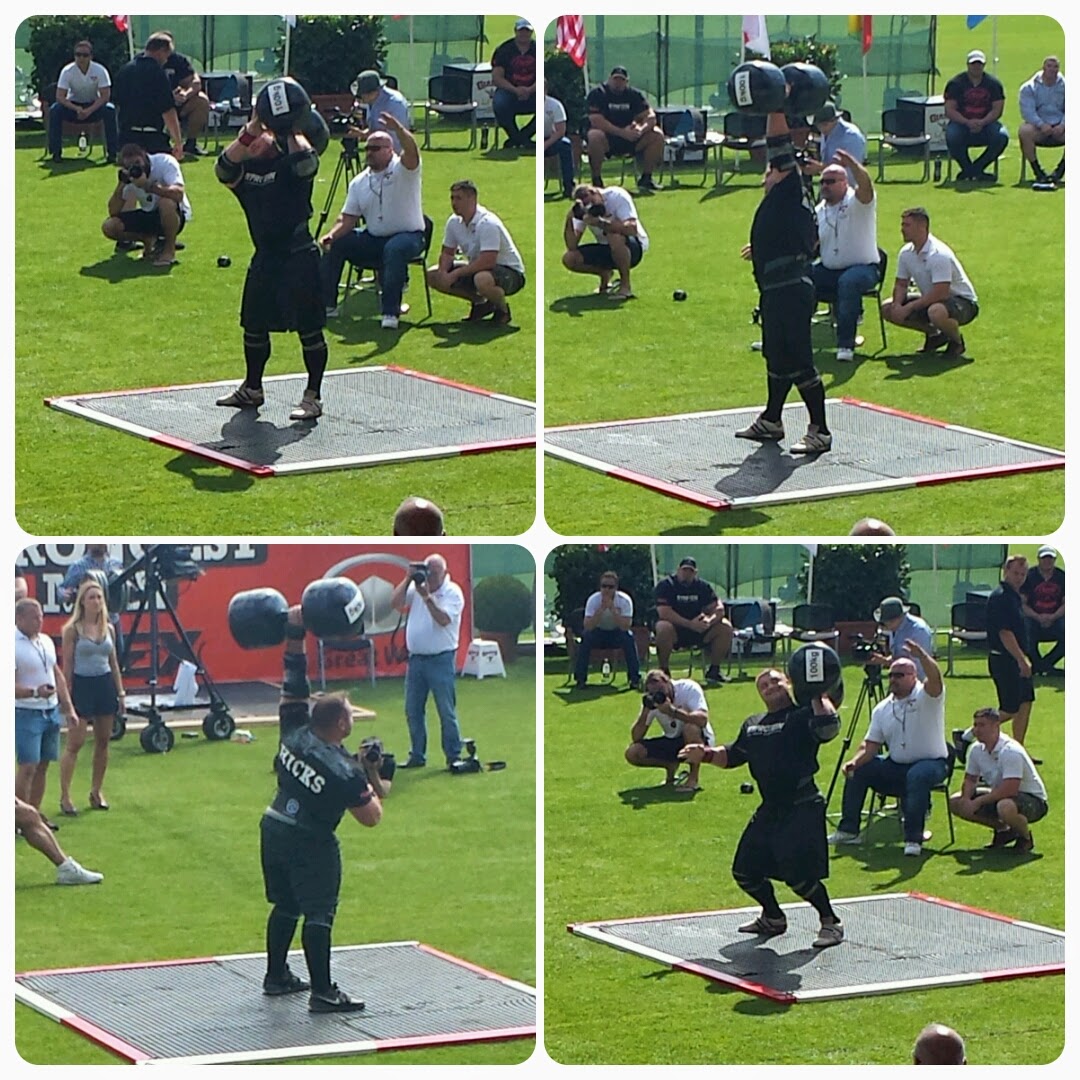 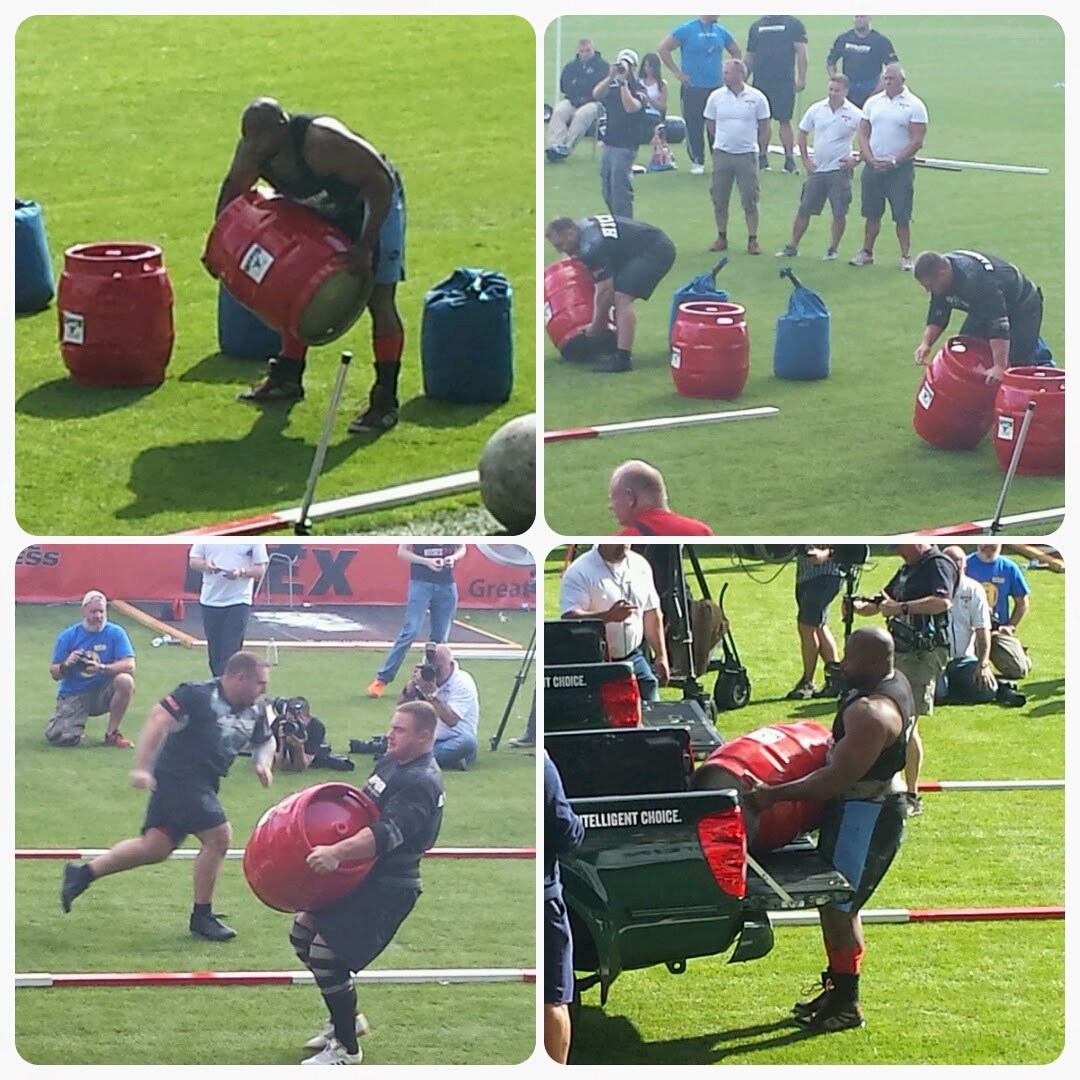 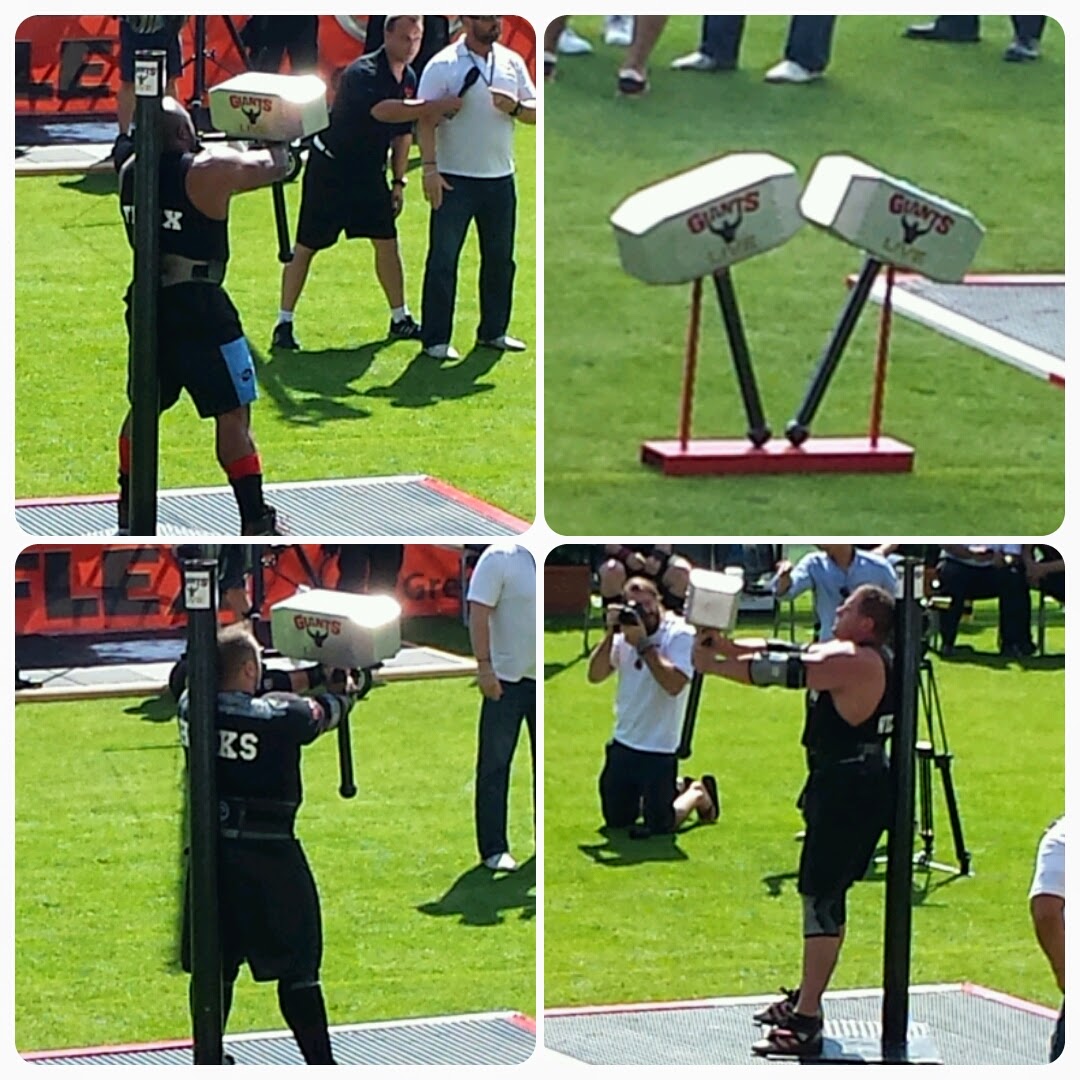 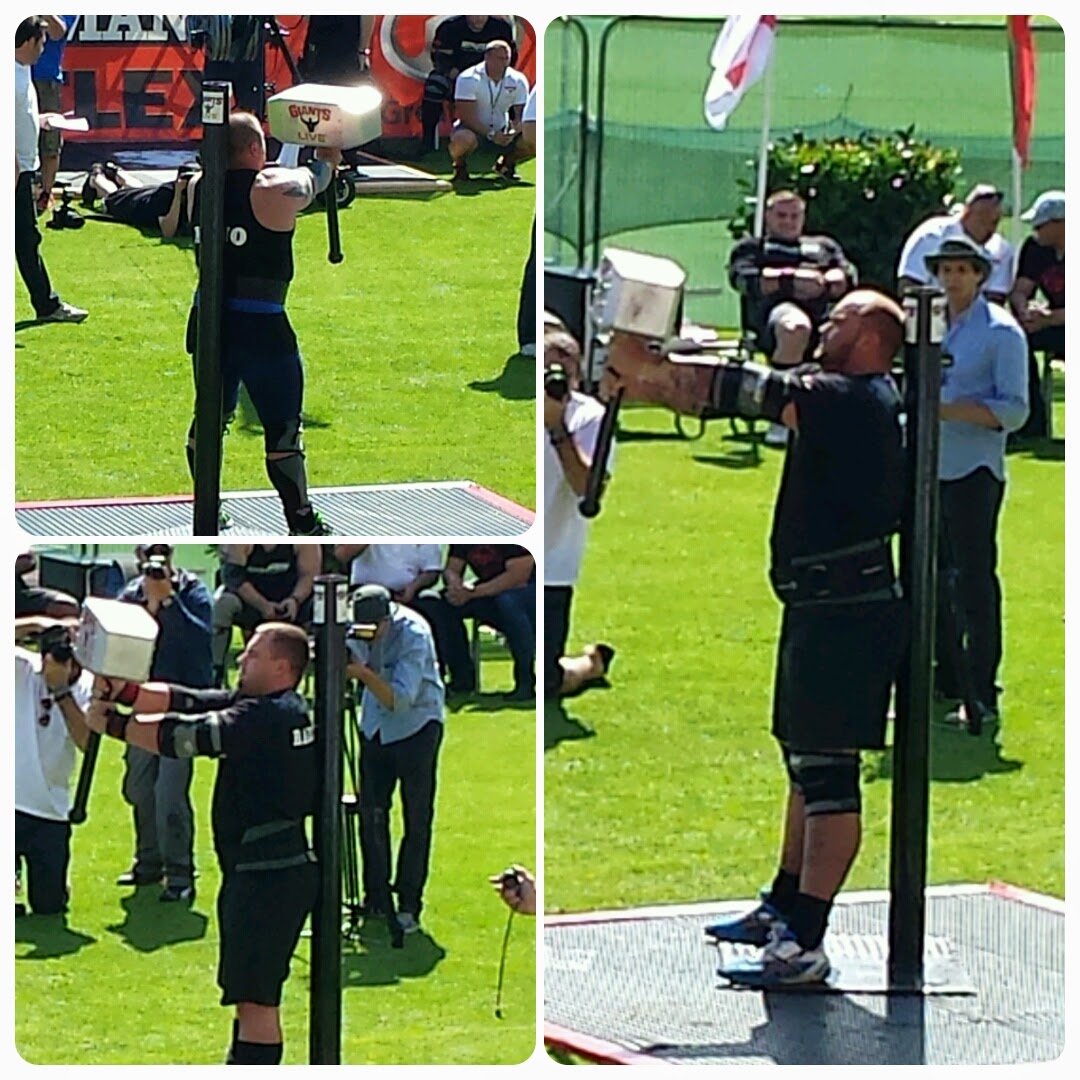 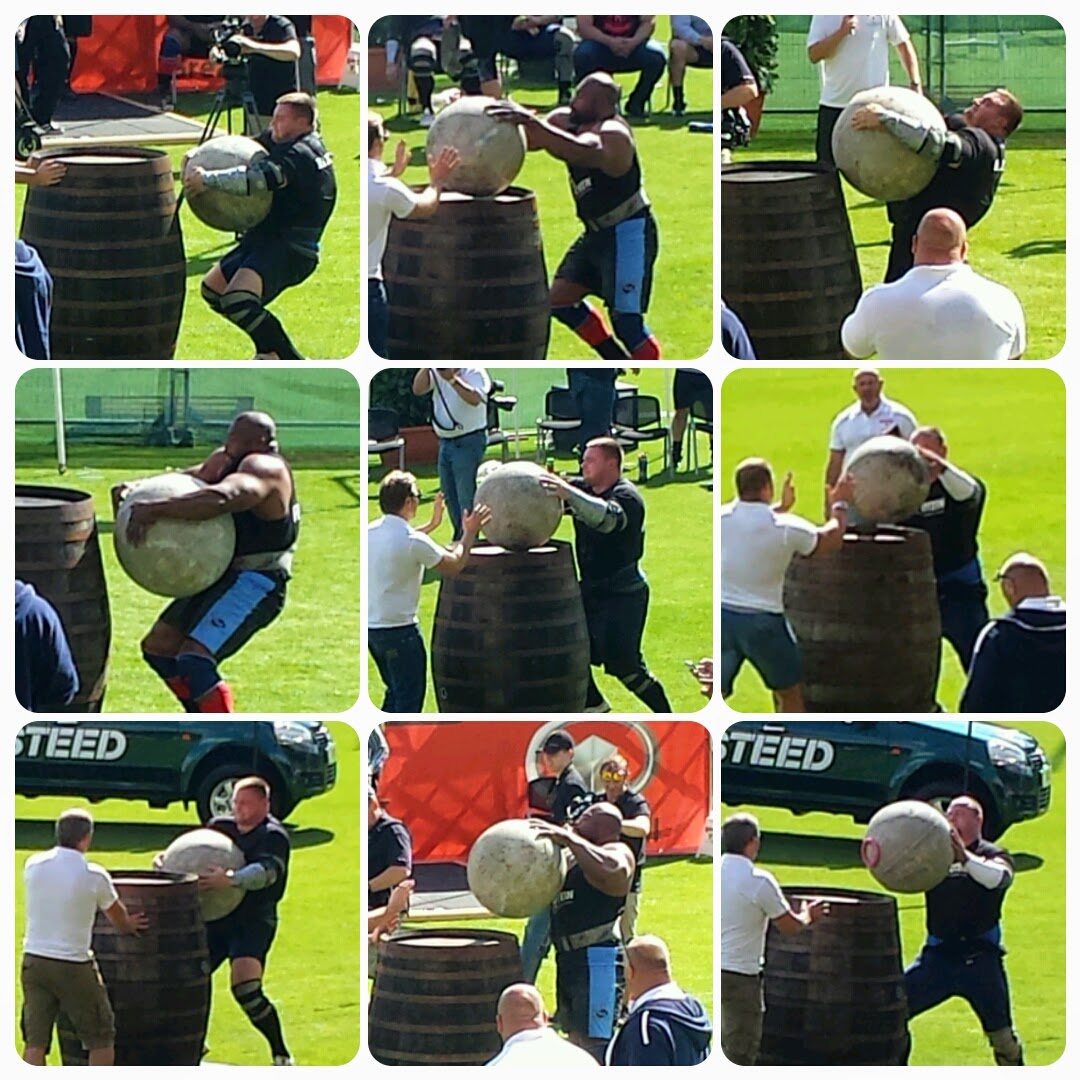 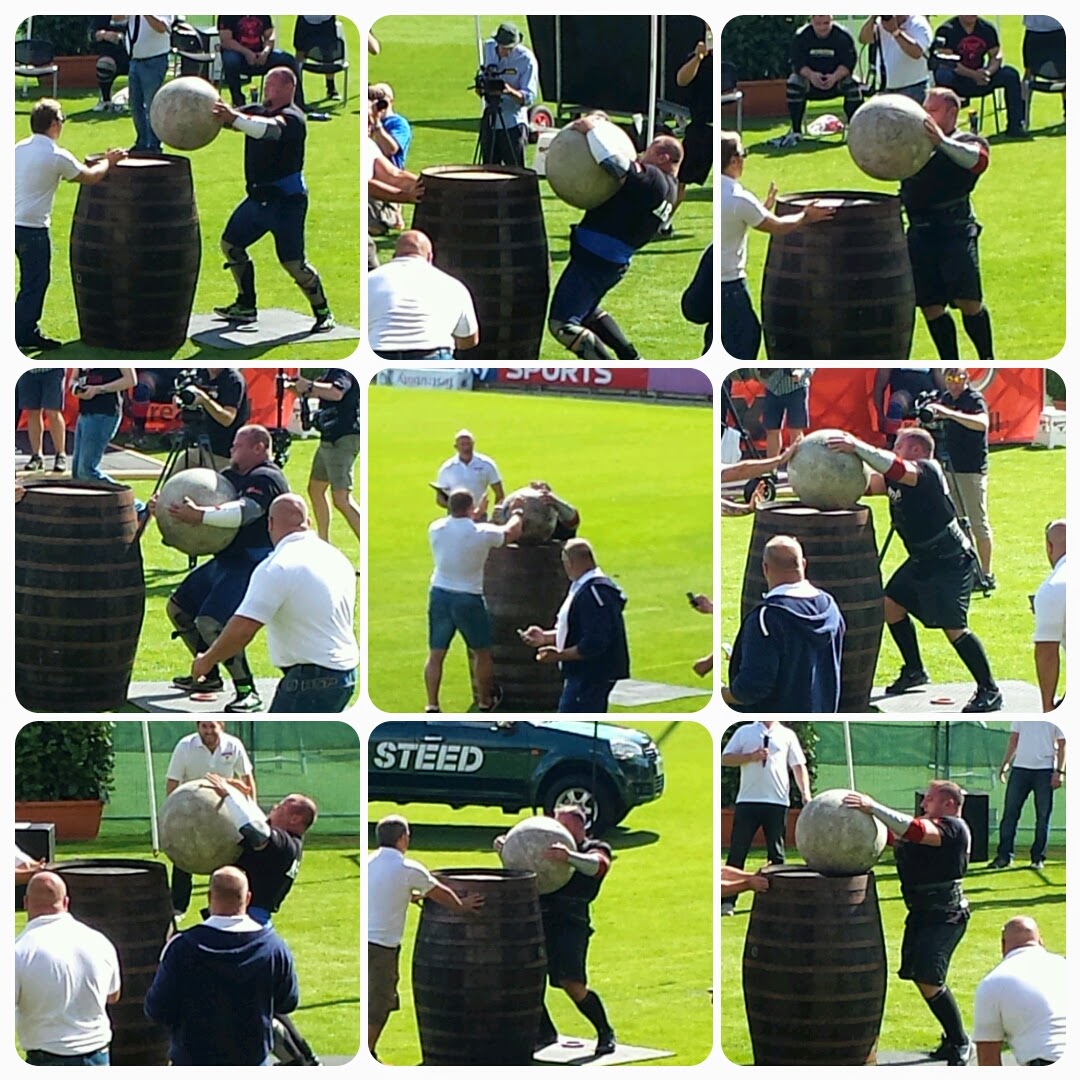 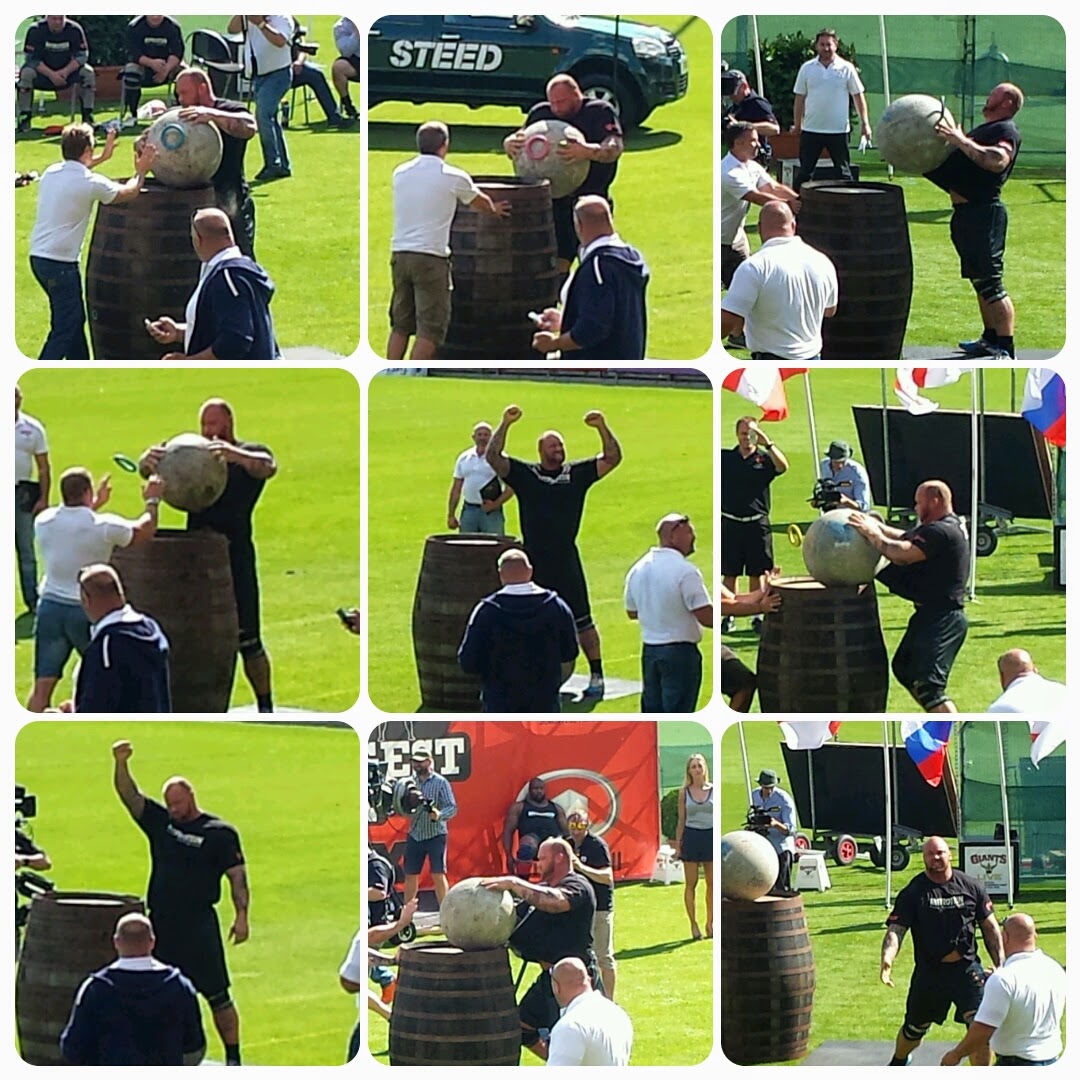 And can you guess who won the stones?! 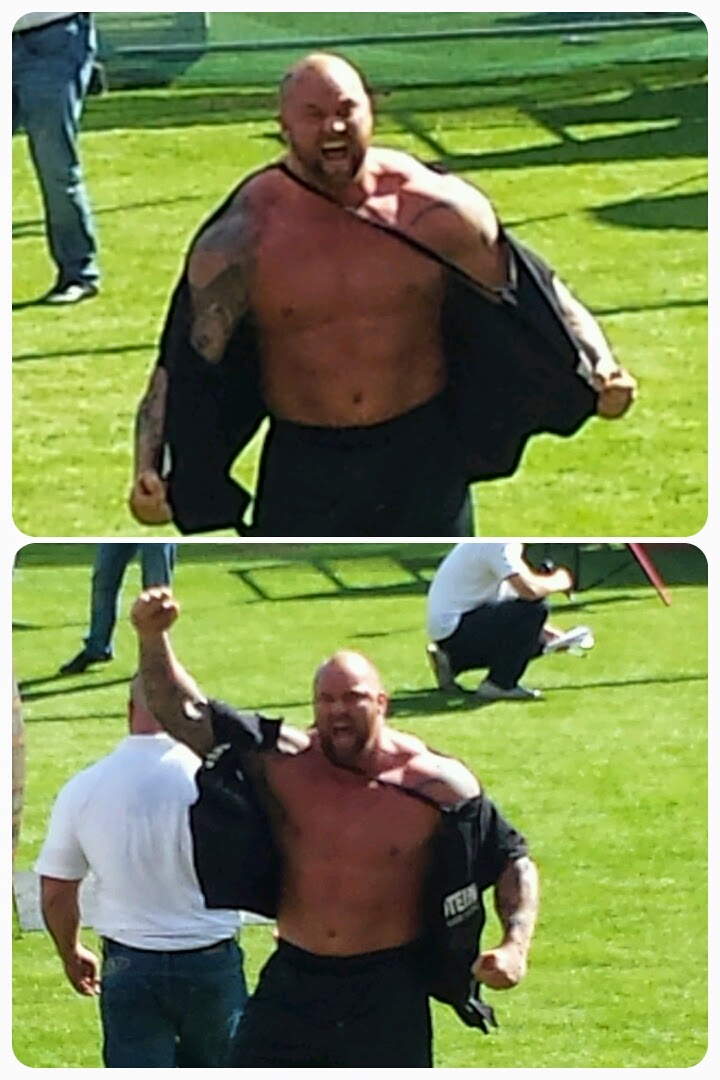 The 'Mountain' himself Thor!!
Even that sweaty ripped shirt was given away....... the ladies fought over it! 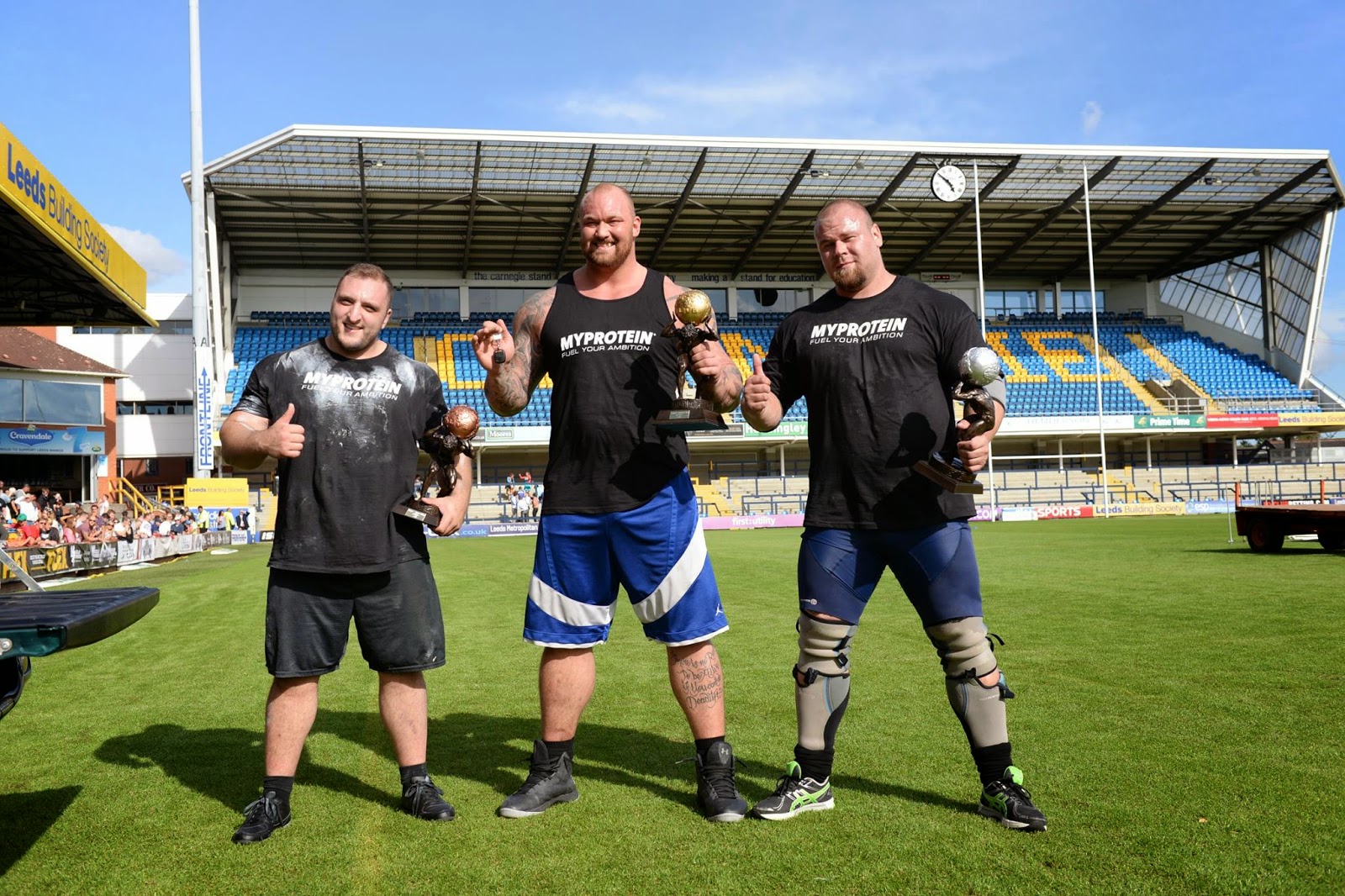 What better way to end the day than with a meet and greet with these gentle 'giants'
Photos, programme & shirt signing and friendly banter :)


On a final note, if 8000 fans turn up to this kind of show just imagine the crowd size for
WORLDS STRONGEST MAN,
food for thought there people!

*All photos, videos and thoughts are our own.
Posted by A Blogs Life at 09:37 2 comments: