Our Experience on American Airlines 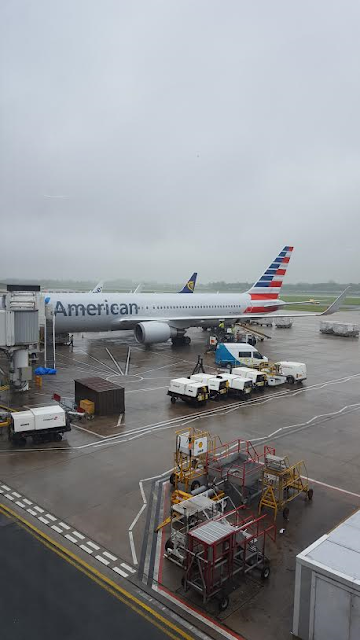 During our travels on holiday (vacation to our USA followers) we have on many occasions used lots of different airlines, ferry companies and car hire places. We thought it would be a great idea to start sharing our experiences with you all so that if you're planning that family holiday (vacation) you have some little pointers from us.

Late May of this year we decided to return to New York and spend some more holiday time around this area of the USA.

I had started looking for flights really early , as early as October 2015 to try take advantage of any promotional rates that might get put into the market. American Airlines (AA) came up during my searches and I was really happy when I got our flights return from Manchester (MAN) to John F Kennedy (JFK) for just over £1000.00 , in fact I was so impressed with the price that I actually phoned up to make sure I wasn't missing something ! Last thing I would have wanted was to tell the wife it was one price to then realise I had not read the small print and it was actually more !

However it was correct and I booked the flights there and then.

As we were travelling with an Infant we could not use the online check in so I have no real comments on that aspect of their service.

So let me give you a run down of the pro's and cons we experienced with American Airlines and we hope they come in useful for you if you're planning your Vacation (Holidays UK folk!)

So we already know the price was good , in fact in was really good so i am going to say 5/5 for that aspect.

Now as for checking in, on arrival at MAN and JFK, I have to say it was not so good, in fact it was pretty darn poor. Checking desks we really understaffed at MAN and it was one of the longest times I have had to wait to check in.......until we came home. I can only describe the check in at JFK as shambolic, we waited in line for over 1 hour and eventually after I reminded a member of staff that our flight left in just over an hour we were rushed through. We have flown out of both airports before and not experienced this level of service so I have to pass judgement onto the airline. So for this aspect I'm giving a score of 1/5.

Needless to say though we made the flights and in both instances they left on schedule so 5/5 there. Our plane was a Boeing 767 with seats of 2,3,2 arrangement. We had pre-booked our seats online and went for row 42 taking the three seats in the middle. We chose these seats as they were ideally for changing the baby and should our 11 year old need the toilet they were very close to our seats.

Upon preparing for take off we requested a lap strap for our baby (1 1/2 years old) and we were a little surprised to be told that American did not provide infant lap straps.....although this meant we did not have to strap her in and inevitably start the crying and complaining , from a safety point of view I was a little surprised as this was the first airline I had flown with where one had not been provided so 3/5 here for that.

We were in economy class or coach as some people refer to and although we were quiet comfy we did have to walk through the upper class section towards the front of the plane and I must say it looked very comfy and very relaxing and I drooled slightly as I gazed at  the stretch out chairs, dreaming of how my long legs would thank me if I was in one of those for the 7 hour flight............perhaps something to experience on a business trip one time !

Anyway back to my review, so we got buckled in , seated comfy and then my 11 year looks at me with a fear in her eyes. "Daddy there is no TV's in the headrests " I took a deep breath and looked up at the headrest in front of me and she was right. At this point panic set in a little as the TV was our back up with the baby should she decided that sleep was not on the cards. So we were really disappointed to find that the plane seemed some what dated and the TV's were position at those awkward angles down the isles for you to watch whatever was chosen. Luckily enough .....because we plan for these sort of scenarios we had downloaded some Peppa Pig etc onto the Ipad. So from a in flight entertainment point of view I'm going 2/5 as it was not as good as other lines we have flown with on the same route.

Drinks and food were included in the ticket price and drinks were served regularly by the airline cabin crew which were very pleasant and helpful and both kids loved the chocolate ice cream when it came round. Only criticism i would have and again its from a father's perspective is that we chose our seats at the rear for the amenities , yet when the food was served there was a limited selection of each meal, both food carts were started at the front of the plane so by the time they got to the back there was no selection for the children (Not just ours might i add) so this was poor planning in my opinion and our eldest daughter did not care for what was left (Mac n Cheese). However the food itself was ok so 3/5 there.

Our flight on the way home was a night flight and was the same type of plane. The flight was not full so we managed to get an extra two seats so we could spread out a lot more, the airline crew were really helpful in noticing we had the kids and allowing us to get the seats before anyone else so 5/5 there for American.

One of the best things about flying with American was that although the baby was a lap passenger she was still granted 23kg of luggage, something we did not get when we flew with Thomas Cook the year before, its a really big help to have the extra especially when you want to bring back all those American goodies , so 5/5 for that as was a really nice touch.

So i hear you ask ......would the Parkinson family fly with American Airlines again ?

If the pricing was as cheap as what it was this time , maybe yes but would i pay a small amount more for a more kid friendly flight.......yes i would, but its one of those things you would have to assess at the time and inline with your Holiday (Vacation USA peeps) budget.

*All thoughts and photos are our own.
Posted by A Blogs Life at 21:29 No comments: