Fun and Laughter at Lightwater Valley

Any parent planning a day out knows how hard it is to get 2 kids up, washed, dressed and out the door on time, right?!
So, imagine our surprise when said kids are ready, with matching shoes and a coat 10 minutes before leaving time!!
Whats our secret i hear you yell? Turns out a fun day out at Lightwater Valley (see here) deserves the extra effort.......who knew?!!

Now the last time i visited this theme park was, well, lets just say its changed a fair bit since then!
The first thing to greet us was a very awesome looking Dinosaur themed 18 hole Mini Golf course, not technically in the theme park so there's an extra charge to play but totally worth it and not as much as you'd expect. Definitely a good way to get your adrenaline going for all those white knuckle rides that await you just beyond the gates :D

As we went through the little market square our youngest visitor (18 months old) spotted what i can only describe as one of the best parks i have ever seen! A giant Angry Birds themed one to be precise, and given her the option this is where we would have spent the WHOLE day. 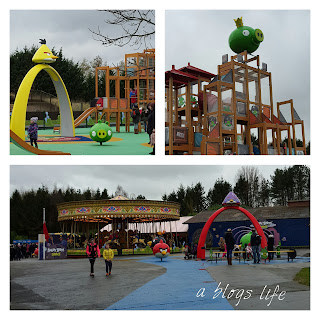 To say she was only young she manged to climb up on everything, think the hubby had the odd heart attack or two along the way but all the kids seemed to love it, young and old!

Next up on the list was the Swing ride (i slowly turn green writing about this ride) but our eldest daughter and her friend absolutely loved it and may have gone on this ride not once or twice but THREE times in a row!! *oh to be young again!* 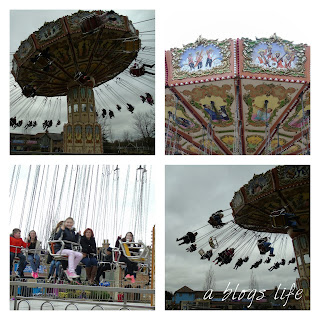 As the daughter and friends queued up for The Eagles Claw i took the minis on the Eagles Creek Farm, which coming from an adult was great! The little ones thought they were actually driving the tractor around the farm, the look on their faces when we got to the the animals was priceless!! 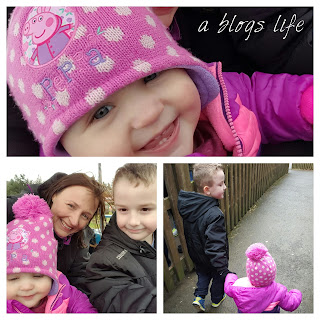 Thankfully i didn't have to stand and watch as the eldest flew around on what was, in her words 'The most epic of rides!' 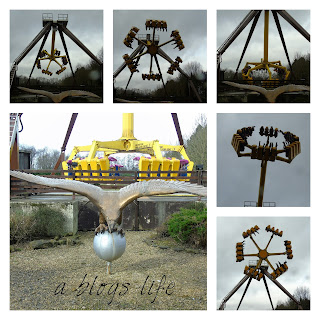 To settle those tummies before lunch another run around the Angry Birds playground was a must.... 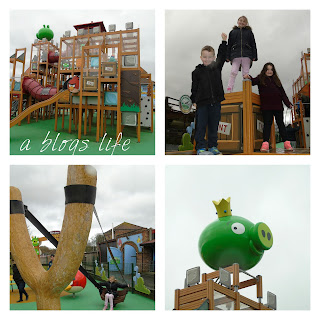 ....before we headed over to The Granary which had a lovely selection of food for all appetites.

From
Homemade Soup to Baked Potatoes

Fish and Chips to Steak and Ale pie

There's something for everyone, and if you visit on a Sunday you can even get yourself a Sunday Lunch which has to be finished off with one of their scrummy homemade cakes or desserts!!

After our tummies were full we had a little venture around the little shopping area, bought a couple of treats to remind us of our day before heading back to the rides. 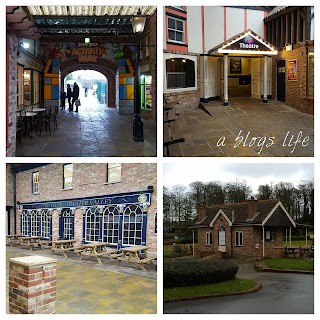 The little on spotted Noah's Ark, which resulted in us joining the queue a fair few times :D 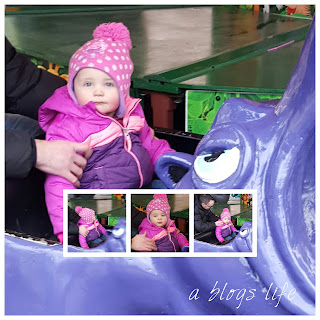 While the older ones had a few go's at winning themselves a prize on a few of the game stalls. Once their pockets were empty and with prizes in hand we headed on over to the petting Zoo where they got to feed, hold and stroke many different animals. From there we hopped over the bridge to the Falconry Centre where they house 35 amazing raptors including Owls, Falcons, Eagles and Hawks (the hubbys favourite part of the day) 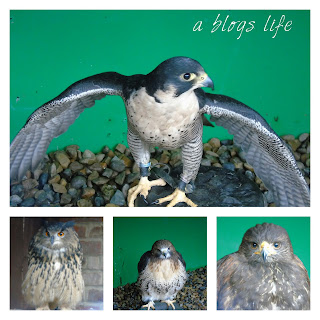 They also house Snakes, Rabbits and their super cute Ferret Family!
All our kids enjoyed having their photo taken with this stunning Owl. 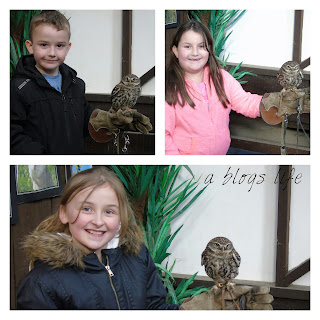 With the day coming to a close the begging of 'Just one more turn' we headed to the Swing ride again and with the look out of heading home after a wonderful day of giggles, laughter and some stomach turning rides!

Our day at Lightwater Valley was brilliant! Everyone enjoyed themselves and we had a pretty mixed age range in our group, from 18 months old to 30something, there was something for everyone and not once did we get the 'Im bored!'

So if you need something to do with or without the kids (don't tell them i said that!) then get yourself to Lightwater Valley!!
They have some amazing offers going on in the holidays,

And if your child happens to go to a Bradford (West Yorkshire) district school check those book bags!!! Our eldest came home with a Yorkshires Magnificent Attractions discount book that has an offer for Lightwater Valley.

We will definitely be heading back to Lighwater Valley at some point this year and we hope to see you all there too!!

*Park tickets given for free, All thoughts and photos are our own.
Posted by A Blogs Life at 19:15 4 comments: 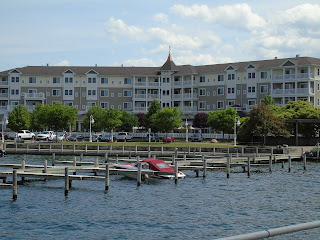 Every now and again you stumble across a place that just leaves you flabbergasted. This was the situation when we stayed at the Watkins Glen Harbour Hotel at the start of June.

It is quite simply one of the nicest, most scenic hotels we have ever stayed at.......but how did we end up staying there i hear you ask ?

Well as our regular readers will know we visited the USA and Canada in May & June of this year, with us driving from the South of New Jersey to as far North as Toronto.

Its a long drive with young children and we therefore wanted to spend a day and night somewhere to break the journey up. I had spent quite a lot of time looking at the routes i was going to take to drive up to Canada and that's when i came across Watkins Glen.

So where is Watkins Glen ? 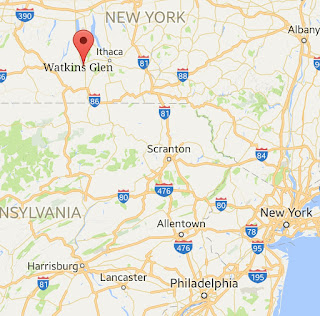 So once i had established that this was the town we were going to stay at, it was time to find some accommodation and this took me no time at all. As soon as i saw the image of the Watkins Glen Harbour Hotel there was no other choice.

The hotel is located right at the edge of Lake Seneca and over looks a lovely harbour area where there is boat tours of the lake and a number of walk ways for you to take a leisurely walk. 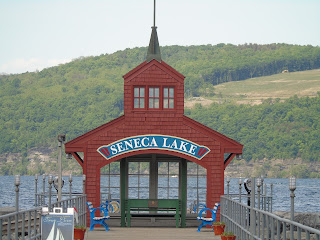 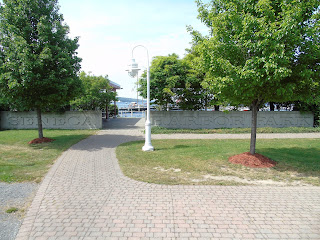 Now the Hotel itself is out of this world.

Not only does it have these views to boast about but it is spotlessly clean and of a very high standard. The front of the hotel has a nice size car park and a welcoming reception area.

The rear of the property has a lovely patio area where you can sit out and enjoy a drink or a meal from the hotel restaurant. 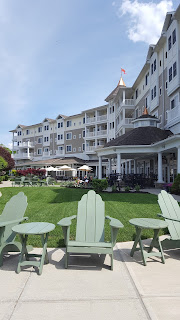 Upon arriving we received a warm welcome from the staff and the check in was done within minutes.

We had selected to stay in a family room with balcony view and paid a small premium to ensure that we had the lake view, which was sooooo worth it ! 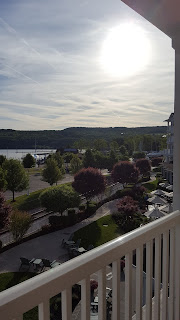 The rooms were gorgeous and boasted a large entrance area, a huge bathroom with an amazing walk in shower, two queen beds, flat screen TV, fridge, air con .......you name it , this place had it. 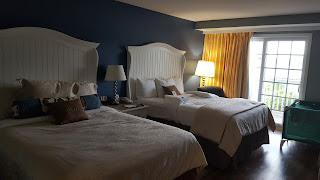 The room was very spacious and light and the beds really comfy. 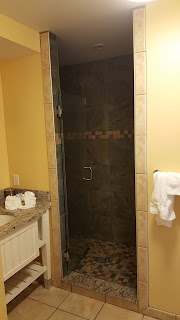 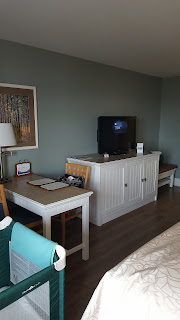 A great range of bathroom products was also provided at no extra charge. 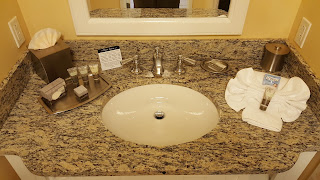 What stood out for me though was how they had instantly catered for our youngest daughter. Without request or prompt there was a separate cot (crib) made up with baby pillow and blankets....it looked brand new , we were already really impressed but this really did put the icing on the cake for me and the Mrs.

Small little gestures throughout our stay made you feel even more welcome, from the voice mail to our room once again welcoming us to the welcome card and chocolate left on our pillows. 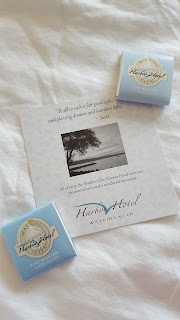 We were actually taken back by how nice the Watkins Glen Harbour Hotel was, and i have to say i wish we had been able to spend more time there than we did. The kids loved it, the wife loved it and i loved it and when your family is all happy it makes for a excellent Holiday (Vacation)

I would recommend this hotel 100% to anyone who finds themselves in the area and we will for sure return there should our travels take us back to that area of the USA. 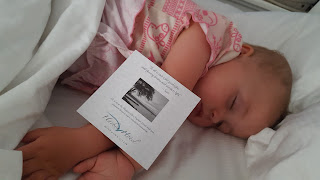 *All thoughts and photos are our own.
Posted by A Blogs Life at 22:33 No comments: