Family Night In With The Entertainer Toy Shop.

It's a tradition in our house that Saturday nights are family nights, whether it being a trip to the
movies, eating out, home movie night or games night, as long as its done as a family.

So when The Entertainer Toy Shop (see here) said they would send us the 'Perfect Night In' bundle we jumped at the chance!
Expecting some kind of game to arrive i was shocked when this MASSIVE brown box landed on our doorstep.... I mean just look at the size of it!! 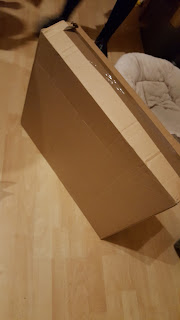 I waited for the daughter to come home from school so she could open the box and see what was inside and the contents, well, there was a ton of stuff! 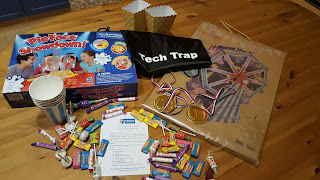 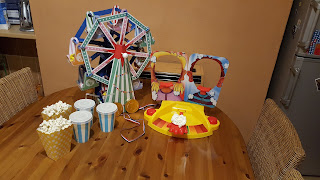 With the popcorn popped, the ferris wheel set up and the game ready to go it was a fight as to who went first.
Now the showdown game is a little different to the original Pie Face game.
This version is a battle of who can whack their button the fastest and flip the pie in their opponents face.

So round 1 *ding ding*
Dad Vs Daughter

Round 2
Mum Vs Daughter

Round 3
Mum Vs Dad

This game caused a multitude of laughs, we found that more whipped cream on the launch hand hit you better in the face. We noticed that the board did slide about on the table a little, some of those little black rubber feet would have benefited but it did add to the fun and I'm pretty sure Dad tended to slide the board when he was starting to loose!
And like every parent we let our daughter 'win' here she is celebrating with that yummy chocolate medal...... i may have hidden the other one! 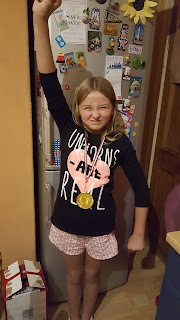 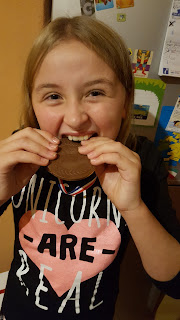 A brilliant fun family game absolutely perfect for our family night, and you know it'll be coming out for our family Christmas nights (pretty sure the daughter wouldn't mind pie facing Grandma and Grandad so id make those gifts this year extra good!) And obviously once the little sister saw the game set up the next morning she had to 'have a go!' and no, we didn't pie face her before you ask! 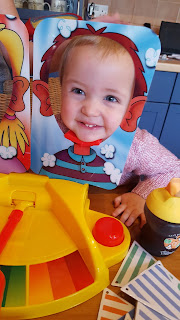 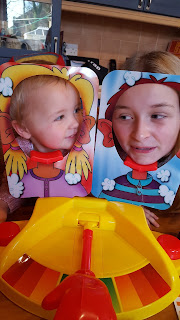 Be sure to check out The Entertainer Toy Shops website, it has some amazing offers on at the minute

Plus many more amazing offers.....perfect for those Christmas buys!

*PR sample from The Entertainer Toy Shop. All thoughts and photos are 100% our own.
Posted by A Blogs Life at 07:26 4 comments: 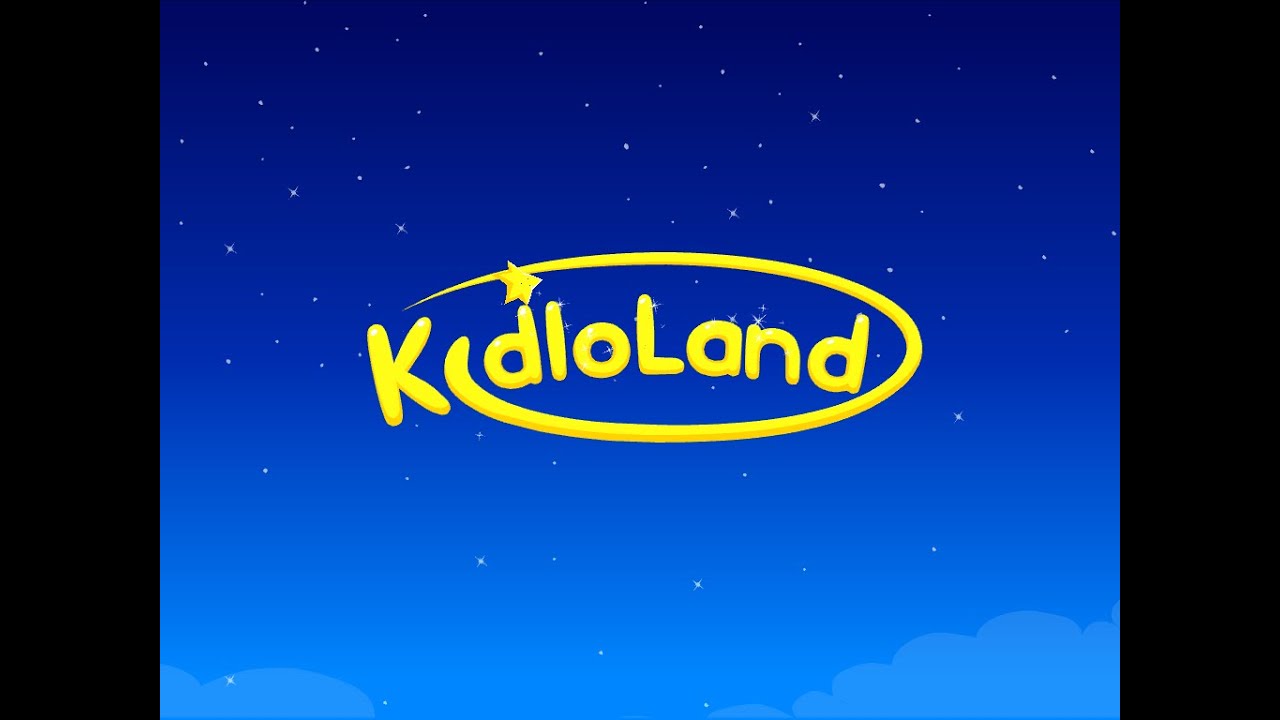 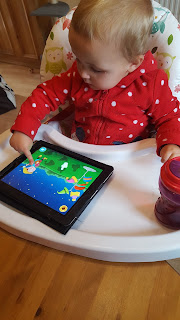 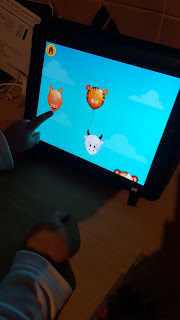 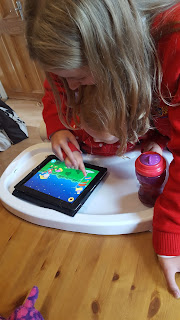 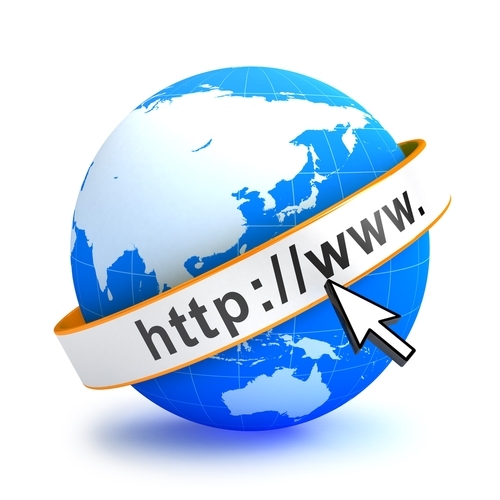 *App sent for review. All thoughts,photos and videos are our own.
Posted by A Blogs Life at 08:37 5 comments: 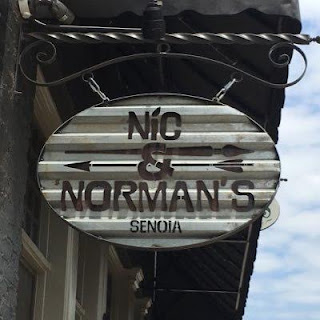 Every now and then you get to visit a place where you just can't quite believe you are there.

This was the case for me recently when i was in Atlanta USA for work.

Now if you're a Walking Dead fan like me and the Mrs, then this might be the part where you get jealous.

After a busy day working, my colleague and i decided to go to Senoia. If you're not too familiar with this area this is where a lot of the Walking dead is filmed, and the small town of Woodbury, used in season 3 is actually Senoia ( You may remember that's where the Governor was from ) 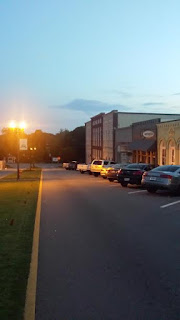 Now as you can well imagine, at this point as a fan of the show i am already in "Fan Girl" mode and messaging my wife and friends.

When i think i could not get more excited, my colleague, Bobby, says to me
"Steve, we are going to Norman Reedus (Daryl Dixon) and Greg Nicotero's restaurant for dinner" (One of the producers from Walking dead) "

At this point i just pause in complete silence , my brain trying to process what it believes my ears have just heard.

"What are you talking about Bobby?" i say to him.

Now at that exact point i stop messaging the wife , because i know damn well that if i tell her i am about to go into Daryl's restaurant she is going to divorce me quicker than Rick Grimes takes care of the walkers !

As we walked down the street and i recognise so much of the town from the show i still can't quite believe that we are about to go there. 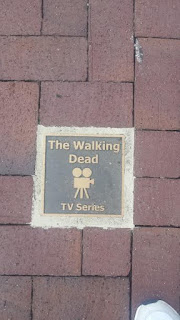 But low and behold there is a restaurant called Nic & Normans.

Inside the restaurant is really nice and we were welcomed by one of the waitresses and shown straight to a table.

Now the one thing i want to say about Nic & Normans before i go any further is the price. I expected this to be quite expensive , but it was far from it and  was very reasonably priced , my main meal for example was only $13.00

There was a large selection of drinks on offer and i went for a Blonde Samuel Adams Ale with a slice of orange in.

For starters i ordered the Philly Cheese Steak Fries.......there was enough to feed a family of four , a huge portion !! 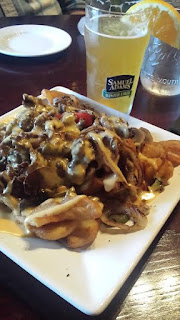 The Menu has a great selection of Salads, Burgers, Steaks, Chicken and Fish, just to name a few. 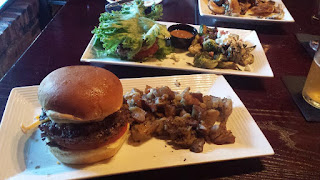 This picture probably does not do the size of this burger justice, it was perfectly cooked and the food was pipping hot, absolutely delicious.

As i devoured my burger and with the juices dripping down my chin, i paused for second and not only thought how lucky i was to be sat in here in Senoia ( A guy from West Yorkshire, England) but also that this burger was so nice i was consuming it similar to that of a walker consuming one of its victims.........napkin please !

Now rumour has it that if you are really lucky, Norman Reedus has surprised people and randomly dropped by.

I was not so lucky, which in some ways is a good thing , because if my wife wasn't already close to divorcing me because i am literally on the set of Walking Dead and i am eating in the restaurant that her favourite actor from the show owns, then if Norman had made an appearance i expect i may have been in trouble.

The service in the restaurant was great and the staff were very helpful and clearly happy to be working there.

I only wish i had been in Senoia longer so i could have visited more than once and tried out other things from the menu. 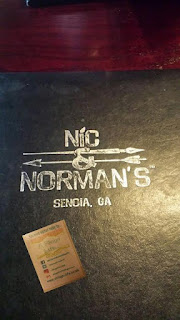 If you ever find yourself anywhere near Senoia GA USA, please take the time to visit Nic & Normans , whether you are a fan of The Walking Dead or not this place is a fantastic place to dine and at such a great price its not to be missed.

I would like to thank the staff off Nic & Normans for their hospitality and for not being too freaked out by an English man acting like a child in a sweet shop. 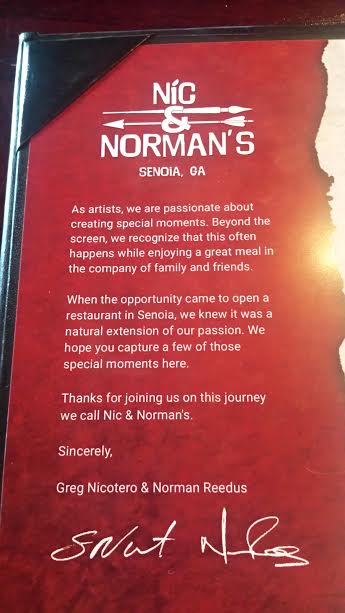 *All thoughts and photos are our own.
Posted by A Blogs Life at 21:41 1 comment: